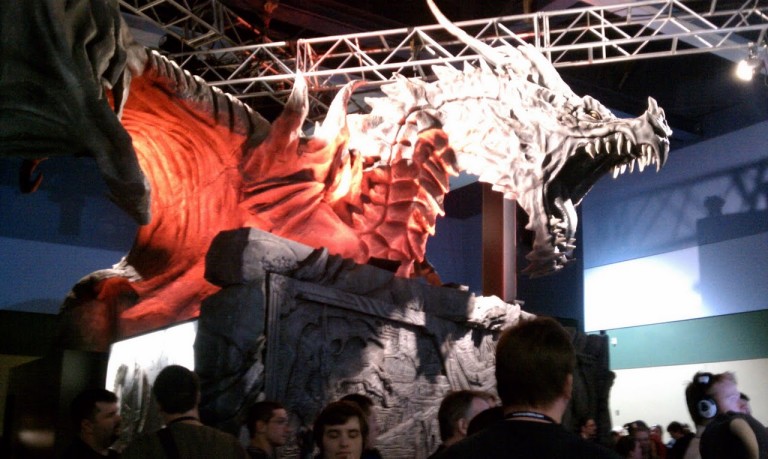 I am super excited and energized! Not only did I get to spend last week back home in Washington State on vacation (yay!), but I also had the opportunity to go to the one and only PAX Prime. Sadly, I was only able to go to the event on Sunday, and barely had enough time to assess the situation before my feet were cramping and I had to call it a day. Still, I had a blast. I got to talk to a bunch of developers and designers of games, play a ton of awesome games (and some that were only okay), and even ran into Felicia Day and Wil Wheaton.

The show floor was much more busy and crowded than I am used to.

The day did not start out promising. I rendezvoused at the wrong Starbucks, but luckily my companions found me before too long. I don’t drink coffee, but I needed more than cold pizza for such a day of joy, so I nibbled on a tasty blueberry muffin. My friends and I arrived at the convention center around 8:30 to stake our claim and to solidify our place in line. We sat down and waited for the doors to open at 10.

ROOOOAR! The Skyrim exhibition came complete with an enormous dragon.

We were scrunched between two fairly obnoxious groups of people: a trio of early teenagers concerned that they would not be able to play Battlefield 3 on account of it being rated M; and a large group of e-thugs who felt it was their god-given right to yell back and forth and be generally unpleasant. Normally I wouldn’t have paid much mind to either, but everyone in line was packed in so tightly there wasn’t any way to avoid it. Soon enough, we were released into the wilds of the exhibition hall.

Believe it or not, I am not really a people person. I’m not (entirely) socially inept, but I am a bit shy and don’t like being around a lot of people. I grew up on the edge of a smallish town and live in a college town now; I’ve never lived in the big city before. I’ve been through my fair share of bars and fairs, but the close-packed people always makes me feel uncomfortable. Particularly when those people are all running this way and that, trying to get in line for the hottest new games.

I thought about getting in line for the AAA games that are coming out soon: Mass Effect 3, Skyrim, Bioshock Infinite, or Battlefield 3, but I considered the lines: was it really worth an hour of my time to play 5 minutes of a game that is coming out in three months? I stood by and watched the gameplay for each, but I didn’t bother with the lines.

I will save you Elizabeth! But let me take your picture first...

I have to say, all of those games looked amazing. Sure, a part of that is that they are all running on uber-machines that can run the games with the graphics pushed to the limit, but even knowing this, the games were gorgeous and looked great. I think I’m most excited about Bioshock Infinite, but that could be my love for the first game creeping up, rather than a rational analysis of the gameplay footage that I’ve seen. Mass Effect 3 is likewise impressive, and the inclusion of satisfying melee attacks makes me giggle with excitement every time I see it. Plus, I managed to grab a hold of a blow-up energy blade. Score!

I also went to the Good Old Games booth, which was styled to look like a grandmother’s cottage, and came complete with old women (presumably grandmothers) and free cookies. Mmm, tasty.

At the Bioshock Infinite booth was a girl dressed up as Elizabeth, the player’s companion, sitting in the monstrous grasp of Songbird. The actress playing Elizabeth was tired of the role: how many times can you stare at a stranger and reach out for them in one weekend?

I took a few pictures despite feeling bad for the girl.

All too soon it was late in the afternoon and my feet began to ache. Even after getting off of them for a half-hour for lunch, they couldn’t take it. While I didn’t play any of the AAA titles, I did get to see them being played and watched a few developer walkthroughs, got my hands on some swag, and had plenty of time to talk to indie developers about their games. Stay tuned for those mini-reviews!

Glad you had a good time at PAX and thanks for stopping by at the QUBE booth! 😀

And thanks for building such a cool game! I’m planning to pick it up and do a full review soon*.