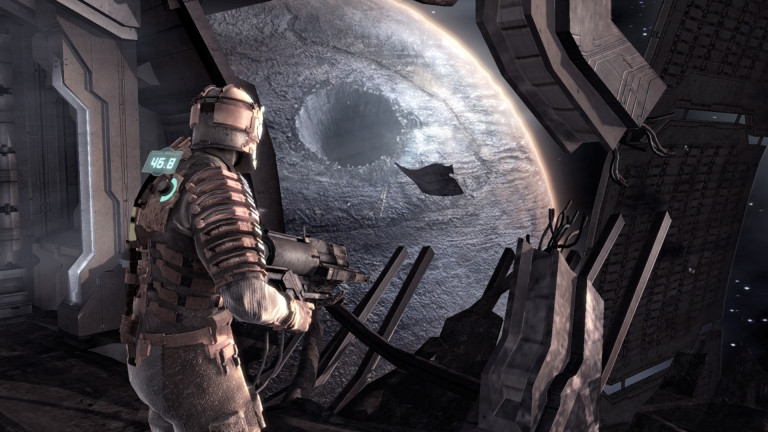 The lights are out. You stand in a dark room, waiting for the decontamination sequence to begin. The only sound you hear is your own heavy breathing. The dim red glow of the next room provide you with a bit of light, but it is difficult to make anything other than silhouettes. The hiss of gas explodes into the room and your ears are overwhelmed. The vapors cloud your vision even more. Decontamination is underway. Wait… what was that moving on the other side of the glass? As you move closer to investigate, an all-too-familiar shriek echoes from behind you. You turn and aim your trusty plasma cutter, and fire.

Isaac Clarke: just another day at the office.

It has been a while since I’ve written a full-fledged review of a game, but I feel like Dead Space deserves one. If you aren’t inclined to play through the game, you should at least check out my entire run through of if. I put a fair amount of time into the game, running through the entire game on Normal, which took around twelve hours, and I had much more fun than I expected, which is always a pleasant surprise.

Planet Cracker starships rip enormous chunks of planets from the surface to mine precious minerals.

The USG Ishirmura is old, industrial, and spooky. Even before the Necromorphs showed up.

Dead Space is a third-person shooter and horror game, developed by EA Redwood Shores, and published by Electronic Arts. The player takes the role of Isaac Clarke, a technician on the USG Kellion, a starship on responding to the distress call of the USG Ishimura, a planet cracker starship. While it may come as a surprise to the characters, it doesn’t come as a surprise to us that the Ishimura is completely overrun with nightmarish creatures, the Necromorphs. It turns out that the Necromorphs are what remains of the crew after they have been killed and transformed by an alien virus. Isaac must travel through the bowels of the ship from one end to the other in an effort to escape, tangling with a wide range of Necromorphs and coming across the destruction they have wrought on human flesh and human minds, all while trying to keep himself sane.

Nothing says "step inside" like miscellaneous bodies floating around.

The game’s graphics impressed me from the start. From the opening scene in the Kellion I knew that I was in for something special. The amount of detail is astounding; everything from the textures of Isaac’s RIG (his mechanical overalls), to the apocalyptic graffiti and movie advertisements scattered through the Ishimura, to the grotesqueness Necromorphs; all of it is wonderful to behold and top notch work. My one criticism of the graphics overall is that the lighting is somewhat spotty, some areas are nicely light or have cool filters, but too often the ship’s dull grey hull dominates the experience.

The ship's malfunctioning systems are often more of an obstacle than the Necromorphs.

The terror and insanity that overcame the crew is truly haunting. Graffiti like this is common.

While the graphics are quite good, especially for a title released in 2008, the sound design of this game is absolutely phenomenal, possibly the best in any game that I’ve played. Nothing else comes to mind that has such amazingly suspenseful music and creepy sounds. Through the first three-quarters of the game I was on the edge of my seat, ready to shoot at any shadow that moved. The shrieks of Necromorphs are particularly nerve-rattling.

But what about the gameplay!?

While the core of the game is third-person, over-the-shoulder shooter action, Dead Space utilizes a unique mechanic that the developers designated “strategic dismemberment”, that is, the most efficient way to stop Necromorphs is to hack off their limbs with your weapons. Sure, you can take down the enemies with body shots, but it will take much longer. Other enemies have specific weak points (often glowing green-yellow) that will explode when shot. These features reward you for taking careful aim and not panicking when numerous enemies show up. Yeah, just try and stay calm.

What you have to dismember your enemies is a number of industrial tools used as improvised weapons, ranging from the lowly plasma cutter to the impressive flame thrower to the amazingly fun ripper, a tool which launches tethered saws that you can control for a seconds. Ammo is scarce, and when you do run out of ammo (and you most likely will at some point), Isaac can still swat enemies away or stomp on them with his metal-clad boots, or just run away. The Power Nodes scattered throughout the game offer opportunities to upgrade your weapons, giving your favorite weapon a bit more punch.

In addition to a standard complement of weapons, Isaac also has access to his Kinesis and Stasis modules. Kinesis is a limited form of telekinesis for moving large objects, pulling items toward you, or even throwing items at Necromorphs. Stasis, on the other hand, fires a blob of energy at a targeted location that will greatly reduce the speed of enemies or the Ishimura’s malfunctioning, Isaac-grinding mechanical systems. Both of these will play a key role in solving the environmental puzzles that the game offers.

Whee! Zero-g is fun to fly around in, but enemies can attack from anywhere!

Another thing that I love about Dead Space is that the game takes advantage of its setting and features zero-gravity and zero-atmosphere areas. In zero-g, Isaac must solve puzzles that require jumping from surface to surface. I’ll be honest, it’s a bit disorienting, but again, I feel like that was the intention. Zero-atmosphere areas are my favorite, though. Since there is no atmosphere, there is no external sound; all you can hear is your own heavy breathing (and Isaac’s!), and enemies can creep up on you and you can’t hear them coming. In addition to not being able to hear anything, Isaac’s suit has only a limited supply of oxygen, so you’ll have to move quickly in order to avoid suffocation. Ironically, the zero-atmosphere situations highlight the sound design; you can hear Isaac’s breathing start to become heavy and pained as your “oxygen clock” ticks lower and lower. Great stuff.

Isaac's oxygen supply is limited, so don't enjoy the view for too long.

If I had to choose one thing that made me love Dead Space it would be the user-interface: it’s all “in character”; everything is displayed to Isaac, rather than to the player. For instance, hitting the map key will cause Isaac to use his RIG to bring up a map which hovers in front of him, but it does not pause the game, causing you to feel as though you are constantly in danger. Health and stasis charge are also displayed in-game: the bars on Isaac’s RIG represent his health and the circle adjacent to them represents stasis charge remaining. All of these UI decisions lead to highly increased sense of immersion that results ultimately in a more compelling and freaky product. My only criticism of this is that the game’s “point me the way I need to go” beacon is just so handy that I found myself rarely referring to the map.

The Hunter heals so quickly that he cannot be stopped with your standard arsenal.

This tentacle was the bane of my existence. It ate me more times than I can count.

When the Necromorphs get too close, they will try to eat Isaac and initiate a quick time event, which is essentially a button-mash session. If you are successful, you’ll swat away the Necromorph or kill it with some hand-to-hand moves (or, as in the case of the necrobabies, your foot). Dying in Dead Space “rewards” you with a gruesome death sequence, sometimes lasting as long as fifteen seconds, and the quick time events offer some of the best death sequences.

While I like the cinematographic edge that these give to the game, I wish that the gameplay was a bit more than just mashing a single button. Even something as simple as having to respond at a certain moment in the animation, or perform a combination of key presses would have made these events more enjoyable. Oddly, the other Necromorphs show their good manners and wait their turn while this whole thing takes place, which makes sense from a game design perspective, as no one likes to die during a cut-scene, it does break the mood slightly.

Ahh! Get off! Enemies that get to close will start quick time events. Mash those keys!

Drop kicking a zombie alien baby is my favorite moment in the game.

The main issue that I had with the game is that I was never able to get my mouse to function smoothly. I tried a number of different settings and the X and Y axes never felt as tight as they could have. This resulted in the aiming being quite a bit harder than it should have been. Still, I can at least make believe that the reason it is hard to aim is because Isaac is a technician, rather than a soldier, so the sluggish aiming is a built-in handicap. Yeah, let’s go with that.

I also found it a bit awkward that I always had to use the “aim mode” key before firing, and if I hit the fire button I would try to push enemies away. It seems like this is a byproduct of the game being developed for consoles. Oh well, it didn’t hurt my feelings too much.

At its heart, it's a horror game. Expect psychological devastation and physical mutilation.

The story isn’t particularly unique, but I like how there is criticism both of the evil corporations (ripping apart planets, poor living conditions for workers) and the crazy fundamentalists (working to start the zombie apocalypse). I also found it interesting that Isaac Clarke is a cipher: he never speaks and you rarely see his face. Clearly the purpose of this was to give a higher degree of immersion, after all, it could be you in that suit! It is odd that in the sequel he is fully voiced (but I’ll get to the sequel later!).

Overall, I thought it was a great game. The control is a bit weak, but the environmental audio and visuals are memorable and hauntingly beautiful (or beautifully haunting), and the unique interface adds a dimension of immersion that I’ve not found in any other game. Despite its imperfections, I highly recommend Dead Space to anyone (over 18!) who likes action or horror games and is okay with being scared out of their pants.