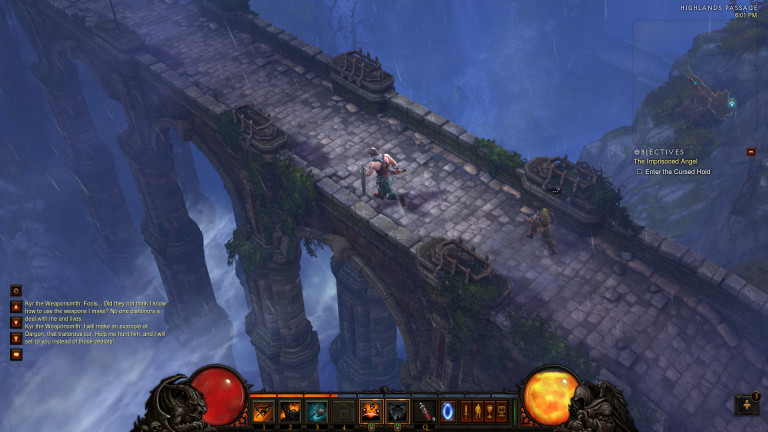 This post contains graphic images from a Mature-rated video game.

Edit: Be sure to check out part 2 of my Diablo III review!

Nothing says "Welcome to a fantasy world" like a nice and cozy tavern.

A couple of weeks ago I picked up Blizzard Entertainment’s Diablo 3. It’s an action RPG in the same vein as its two predecessors, but with a number of tweaks to keep the game fresh. Once again, Blizzard delivers a well-refined product that just may live up to its impossibly high expectations.

I’ve decided to break the review into two parts, the first dealing with the artistic aspects of the game: the plot, the art direction, music, and storytelling; the second part will focus exclusively on gameplay mechanics and my overall impressions of the game.

Of Angels and Demons

The plot of Diablo III picks up the story some years after the destruction of town of Tristram (which occurred during the second game), beginning in the aptly named New Tristram, where the dead have begun rising from their graves. The Lords of Hell(tm) are at it again, trying to bring about the end of the Angels of Heaven, and squash all of the humans along the way. It’s up to you to stop their nefarious schemes.

But you don’t have to do it alone. You’ll enlist the help of Leah, the wily niece of Deckard Cain. She occasionally with accompany you into dungeons, but for the most part she merely acts as a device to tell you where to go next and what to look for during your next dungeon crawl.

The demons are bent on destroying... everything.

You also have the opportunity to recruit a companion who will fight with you throughout the course of the game, and sometimes chat with you about their history or comment on the environment. While these transactions didn’t add much to the way of the story, it did help with my immersion into the game world and it was a welcomed addition.

I don’t want to spoil the specifics of the plot, but I will say it was more convoluted that those of the first two games. Part of my issue with this was that many of the characters that I encountered I only met for a single moment, so it was hard to keep track of them all.

The plot itself is predictable as well. There are big demons and battles and treasons, but nothing that I didn’t see coming. However, I was able to follow the plot and accept it, even if I didn’t find it to be engrossing and somewhat derivative of the plots of the first two games.

Stay a while and listen…

Diablo 3's cinematics are the best in the business.

You'll be treated to animated drawings In addition to the full-fledged cinematics.

The plot unfolds over four acts, each headed off with a juicy fully-rendered cinematic sequence. These sequences demonstrate Blizzard’s dominance in this area; the Final Fantasy games are the only games that I’ve ever played that even come close.

Make no mistake, these videos show an absolute mastery of the medium and are positively jaw-dropping from a technical perspective. They also do a good job of growing progressively darker with each act, setting the tone for the gameplay to follow. I wish that more of the plot unfolded during them, but I understand that the immense cost of developing such scenes prohibits this.

Within each act there are also several cinematics per act made to imitate hand-drawn illustrations. This adds to the feel that the story is being conjured in the player’s imagination from writings in an ancient tome, or from a program on The History Channel.

My main complaint with the way the story is told is that it doesn’t work well when told through the in-game engine. Imagine your character, walking through a town ravaged by the outbreak of war against zombies. You go to talk to one of the people to see what you can learn about recent events. Then all you get to see is the person’s postage-stamp portrait and the in-game model standing. You don’t get to see any facial expressions or body language. It all feels very soulless.

The worst example of this was when a certain character for whom I should feel deep empathy is killed. However, because this event takes place in-game, it had little effect on me and I was still in the “let’s get moving to the next room” mood, rather than the “let me sit back and watch these beautiful graphics” mood.

One area where the in-game plot devices did work for me was in the third act, where a demon appears before you as a hologram and taunts you, even as you systematically dismantle his power base by killing off his various lieutenants and minions. By the time I made my way to the demon I felt like my character knew his enemy and was invested in his destruction. This made for a much more powerful encounter.

Also, I felt that the characters weren’t well developed and too often fell into generic stereotypes: I am an honorable guard, I am a greedy merchant, etc. I didn’t have the opportunity to bond with any of the characters in a more personal way, as I might have while wandering around Jim Raynor’s Battlecruiser in StarCraft II: Wings of Liberty. Sure, I could walk around and talk to characters in the same manner, but I couldn’t empathize with their portraits alone.

This particular zone features a cracked desert and a boneyard that puts the ones in Pitch Black to shame.

No Diablo game is complete without a trip to a fiery place.

Sanctuary, the world in the Diablo franchise, is a world constantly caught between the Demons of Hell and the Angels of Heaven. The images of light and dark feature prominently in its art style, whether in characters, environment, and decor.

The demons and monsters are quite grotesque if not terrifying. You’ll do battle with your old favorites, including skeletons, zombies, and demons of all sizes, from pint-sized eels (you don’t want to know where they come from), to enormous demons that take up most of your screen. Most of them aren’t particularly scary, but there are a few that made my skin crawl.

While known for its action gameplay, the original Diablo also had horror elements: occasionally you’d walk into a room and see impaled bodies or other tangled masses of butchery. Diablo III continues this tradition and cranks it up a notch; some of the things that you’ll come across are quite disgusting. However, because the pace of the game is so fast, I never stood around to soak in the horror and let my skin crawl a little like I did in the original Diablo.

The world of Sanctuary is quite varied. You’ll adventure through a number of different environments ranging from deserts and dungeons to caverns and castles. And to hellish landscapes bubbling with lava, of course. I liked the variety of environments, not only in terms of color palette, architecture and doodads, but also in terms of their layout and openness.

Diablo 3 shows its roots: cultists here have disemboweled a cow and smeared its blood everywhere. Ew...

The color palette feels oddly vibrant for a game with such a Gothic world. Both the cinematics and the game engine itself use a wide range of color, often with warm reds (but hellfire red). I wonder if this is part of the reason why I never felt fear in the same way that I did during previous games.

The most telling thing about the game’s music for me is that I played roughly 50 hours of the game since it came out and I don’t think I can consciously think of one melody from the game. To me, this makes it seem like the music has failed to elicit any kind of emotional response from me.

The first two games had wonderful soundtracks which I can still remember to this day. Maybe it was that the relaxed strumming of the guitar made more of an impression on me that the complex and ambient music of the third game. I’m even listening to the audio from Diablo II even now, just to get me more in the mood for another session with Diablo 3!

This is not to say that the music is bad, just that it wasn’t memorable for me. The music has generic “epic” feel to it, which makes it quite forgettable in my mind.

Overall, I was somewhat disappointed with the story and art aspects of Diablo 3. The worst offender is the derivative plot and how much of it unfolds within the sterile game engine. The cinematics are superb, but the art direction in-game is highly reminiscent of the previous Diablo games for better or for worse. It also lacks a certain bite that the previous games had. Everything is just a little too… soft around the edges. It definitely feels like a Diablo game in all respects.

At the end of the day, Diablo 3 is not a game that you would pay $60 for just to experience the story. It’s all about Blizzard’s reputation for producing games with perfected gameplay mechanics.

So how does the game itself hold up? Find out in the gameplay analysis, coming in the coming days!