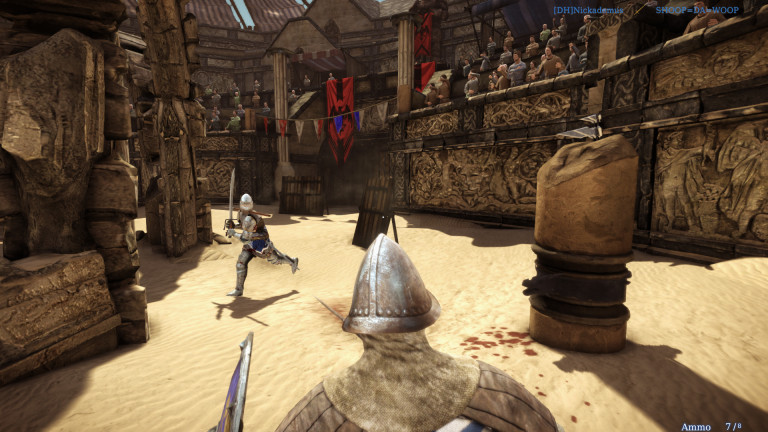 This post contains human pincushions. You have been warned.

I find that it’s fairly easy to do reasonably well charge in as a vanguard with a big weapon.

I’ll admit it: I’ve taken rather a liking to Chivalry: Medieval Warfare.

Clearly, the game is heavily flawed. The issues that I raised in an introduction piece are still driving me nuts. The hit detection is a bit suspect; often enemy attacks will pierce straight through my shield. I’m not sure if it’s working as intended, but it certainly feels like a glitch.

Most players opt for the heavier classes in free-for-all mode. And why not?

I’ve been experimenting with different loadouts. Haven’t quite found the optimal one for my playstyle yet.

No, it’s not an iPad Mini, but rather the archer’s javelin weapon. It takes the place of your bow, but it does allow you to pair it with a buckler, giving you a throwing weapon that you can also stab with.

Throwing is a bit of a pain. You have to prep the attack (moving the javelin into throwing position) and then throw. The animation takes a bit to execute and the projectile itself isn’t very fast. This, combined with its mediocre accuracy means it’s super easy to miss your target, even if they are close.

I nicked his shoulder and now he’s going to nick my head off.

The worst part about the javelin though is that most classes can take a direct hit, sometimes even to the face!

Another annoying thing about using the javelin is that once you throw you are stuck “reloading” for about 5 seconds during which you cannot block or run. And let me tell you, 5 seconds is an eternity when an angry vanguard is swinging a 6 foot sword at you. The only plan is to quickly switch to a secondary weapon during this time, since then you can block a little sooner.

Despite all of this, I do love the javelin. But why?

Sometimes you can’t get away. But the javelin can poke people at close range, and sometimes your foes will back off, give you an easy throw.

I like the javelin because of the fun skirmisher playstyle that I’ve adopted. I’ll dash in and throw a javelin at a foe or a group of foes. If one of them comes at me, I’ll turn and run as fast as possible toward allies or some terrain that I can use as an obstruction. Often times you can live to fight another day.

While I don’t necessarily care about this for kill/death ratios as some players might, I also like to think about the time that the enemy is losing. If multiple enemies are chasing me round and round some building, they are exposing themselves to my teammates and also not completing their objectives.

Right through the clavicle. Take that, heathen!

The javelin archer also has the advantage of being able to go between striking melee blows with throwing the weapon. There is often a lull after a few strikes back and forth, and often players aren’t expecting you to suddenly throw your weapon into their gut. The unpredictability of the javelin is fun to play with; it reminds me of playing the Assault Marine with the Bolter in Space Marine, the enemy never knows whether you are going to close in or stay back and take cheap shots.

Additionally, I feel as though the javelin has a higher ceiling on the amount of damage that I can do in a battle. If I am playing the heavily armored knight, I can wade into the battle and perhaps take out an enemy or two. But even if I get to be the best swordman in the game, I’ll still run out of stamina relatively quickly and be vulnerable.

On the other hand, as a skirmisher, I can run in and out of combat fairly easily. Even footmen, the fastest class and somewhat rare, cannot catch up to archers very quickly. And as I get better and better at throwing javelins, I’ll be more likely to be able to take out key enemies and there will be less that they can do to retaliate. Whereas being a great swordsman still requires me to be able to catch the enemies.

As stupid as it sounds, running sideways or jerking back and forth is a fairly decent counter to javelins.

I do love a skirmisher’s ability to initiate combat. However, the main reason that I love the javelin is the high risk/high reward playstyle that comes along with it. While other classes can run in and swing wildly and do reasonably well, I am at a severe disadvantage if I miss a throw. It’s still possible to win, but against an equally skilled opponent you’ll be a bloody mess very quickly.

Being a good skirmisher takes smarts as well as good reflexes and so far, while I haven’t been particularly successful, I’ve still found it to be very fun and I’m sure that as I get better and better at throwing, my enemies will fear the pointy sticks I throw at them.