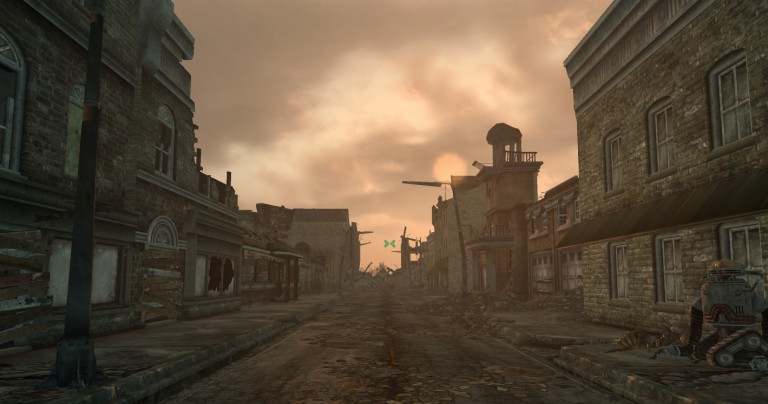 Fallout 3: Adventures in the Capital Wasteland

Oh Fallout 3, I have returned to you at last!

The fact of the matter is that I got pretty damned far in the game about a year (or perhaps 2) ago, but could not complete it due to an unfortunate hard drive explosion.  But now I’m back and ready to save the Wasteland from all manner of unpleasant critters.

My character is Daisy.  Daisy is pretty much a goody-goody, doing whatever is best and trying to get maximum karma.  However, Daisy likes to do it from behind (/giggle), stabbing enemies with her giant sledge hammer.  Or at least that is my plan for her.  I really like the stealth elements of the game, and want to do as much assassination as possible with Daisy; whether it is with small arms or melee weapons.  I’m trying to limit her to those two classes of weapons, while avoiding energy weapons and big guns.  I picked up the Bloody Mess perk too, not so much for the damage so much as for the hilarious explosions of body parts.  It really does make a mess of my enemies.

In terms of plot, I just made it to Rivet City, which, for whatever reason, lags the crap out of my computer.  Apart from that, the frequent loading screens turn me off of the zone.  Overall though, the landscape is fun to prowl in.  The crumbling super market, the Vault, the numerous subways all have their own perks and beauty.  The juxtaposition of the destruction of the Capital Wasteland with the "golden age" music is also as hilarious as I remember: "I don’t want to set the world on fire…"

I remember in my previous game I picked up the Shishkebab and loved it.  Nothing says "pwn" like slashing an unsuspecting Super Mutant with a flaming sword.  Already I have one set of the schematics and all of the pieces needed to make the weapon, but I’ve decided to wait until I can acquire 3 sets of the schematics to get the V3 version with increased durability.  It will give me the chance to play around with the other weapons and build up my melee weapon skill as well.

The funny thing about Fallout 3 is that you can spend an afternoon or a day playing the game, and not dent the main story line at all.  It tickles me, to be honest.  I’m trying to do as much as possible in the single play through.  I don’t know how viable my build will be though, or if I am going to miss some critical item or ability by my simply not knowing what everything does.  I tend to spend most of my time in VATS, which makes me wish that the game simply used a turn-based system for combat.  Perhaps the reason for this is that there seems to be a delay (perhaps a quarter to half second) in my actions, making the real-time mode a bit stressful.

Overall, I am very much enjoying the game.  At least as much as I did the first time.  It’s great to take an hour and just blow up some Super Mutants or Raiders.  The choices presented to the player make me feel like I could easily run through the game another time or two and not see everything.  Perhaps when I’ve finished with this run through, I’ll pick up the expansions.