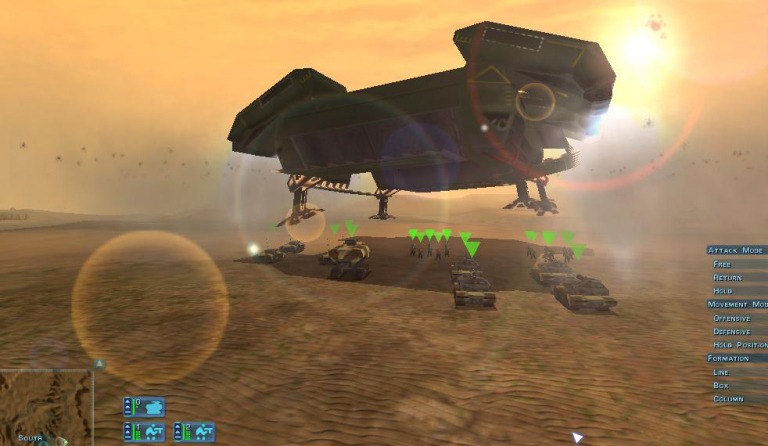 I’ve been diving into my newly acquired collection of indie/Good Old Games, and my latest obsession is Ground Control. The game falls within the real-time strategy (RTS) genre, but distinguishes itself from other games by completely removing the base-building and resource collection, both RTS pillars. Instead of these components, GC focuses in on the tactics on the battlefield. The game came out way back in 2000 and was developed by Massive Entertainment and published by Sierra On-line. I’ve played the first 10 missions and so far the game holds up well.

Ground Control’s story isn’t one to write home about. In fact, it’s laughably weak. Oh noes! The evil Crayven Corporation is at war with the crazy religious fanatics, the Order of the New Dawn. The only missing stereotype is the invasive Orwellian government (but I’m sure they’ll make an appearance in Ground Control 2). The music is reminiscent of Total Annihilation’s killer (but overly dramatic) soundtrack, but toned down a few notches (which is a good thing). The graphical effects aren’t amazing, but given that they are from 2000, it’s not bad at all. In particular I was impressed with the lens flare effects and explosions, which are a must for any game where lots of stuff blows up. I only wish that the view distance could be scaled a little better, but it’s no big deal.

A quick peek at the pre-mission screen shows the amount of depth that Ground Control offers.

What makes Ground Control so cool is how different it is from other strategy games. Before each mission, you choose which troops you want to bring into battle and how those units should be equipped with special weapons and equipment choices. In addition, you can also slightly customize the stats of units by setting their loadout to Balanced, Offensive (more boom), Defensive (more armor), or Speed (red ones go faster).

When you get into the fray, you deploy your forces from dropships… and those are all the troops you get. The focus is always on your troops: where they are positioned, their firing discipline, formation, if they should use their special abilities; it’s all key to victory. Ground Control has a fair amount of friendly fire, so don’t advance into the base right after you ordered your artillery pieces to shell it, because you may be very, very sad with the outcome.

The friendly fire I feel is a little silly at points: most units will fire upon friendlies who are standing directly in front of them. I can understand accidental fire from artillery and tanks at range, but it does not feel right that my infantry would pour all of their rounds into their own armored units. Of course, I can tell them to hold their fire, but really, at that point it feels more like I’m battling my own units’ AI, rather than the enemy AI.

Overall, I’ve been impressed with Ground Control. It’s different enough to make it memorable, even through its mediocre storyline and questionable AI. I haven’t decided whether or not I’m going to try to finish the campaign. I just have so many wonderful games to play. Stuff on tap: World of Goo, Lords of Magic.

Only to refer that we appreciate your review of the game, and also to let you know in case you are interested that this game is still played online.

Oh wow, I didn’t know that the game had such a thriving community! That’s pretty awesome and a testament to how innovative the game is. I may give the game another chance as I don’t know that I ever finished off the campaign.

Thanks for stopping by and commenting!