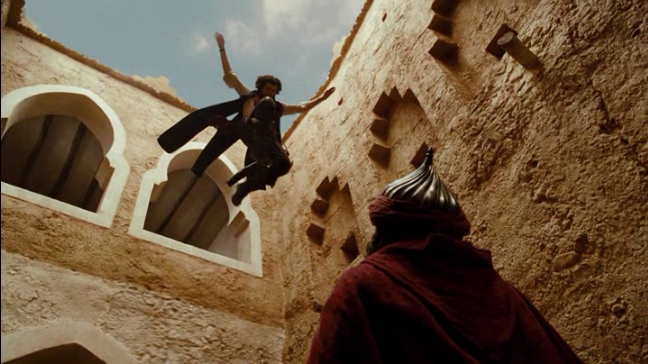 Prince of Persia | Finally, a game movie that isn’t awful

The holy city of Alamut: the latest Persian conquest.

I was shifting through my Netflix instant watch queue a few weeks ago and I came across Prince of Persia: The Sands of Time.

There are a lot of game movies out there. And overwhelmingly those movies suck. No seriously, they’re just awful, and sometimes even make me embarrassed to be a gamer. By ‘game movie’, I mean a movie that is based in a universe originally created for a video game. Crossing over from one medium to the other while producing high-quality content is notoriously difficult.

Dastan's martial ability is overshadowed by his ability to jump from place to place without breaking anything. Or at least not break anything of his.

That is why I was so surprised by Prince of Persia: The Sands of Time: it turned out to be a decent movie.

Princess Tamina is inappropriately dressed for a romp through the desert, but she definitely has spirit.

The Dagger of Time allows its wielder to turn back time.

The story follows a street rat-turned-Prince of Perisa, Dastan (Jake Gyllenhaal). Dastan is the adopted son of the King of Persia, but he loses all when the king is murdered and all the evidence points to him. While trying to clear his name, Dastan discovers the mystical Dagger of Time, which allows its wielder to (wait for it) turn back time. Along the way, Dastan meets a number of characters, including the beautiful princess Tamina (Gemma Arterton) and an eccentric businessman (Alfred Molina) whose wealth derives from tax-free ostrich racing.

It’s a light-hearted B-grade action-adventure flick with a number of decent fight scenes and a formulaic plot, but there are a few redeeming factors. First off, the focus on the protagonist’s agility and acrobatic ability makes for exciting fight (and flight) scenes. True, Dastan certainly exercises a fair amount of swordplay when standing his ground, but more often than not the character’s intelligence and free-running ability is what allows him to be victorious, whether it’s jumping from a rooftop to rooftop, climbing up walls, or swinging from ropes. It’s more akin to the opening scene of Casino Royale or the acrobatics of The Pirates of the Caribbean than The Lord of the Rings or Troy.

Secondly, because the movie was made by Disney, it has a good budget. While the acting is nothing to write home about, it’s decent, but I thought that Molina does a hilariously wonderful job as Sheik Amar. I was particularly impressed by the costuming; you can clearly tell the crew had a lot of fun there. Most of the special effects look a bit dated now, particularly those scenes with lots of computer-generated architecture but the Dagger of Time’s effects are both cool and memorable. If only it had been used more throughout the movie, it would have allowed for more cool effects, more drama, and more humor.

When I saw this movie, it made me go through my collection of games and pull out the identically named game, made by Ubisoft Montreal back in 2003. I’m not sure how it happened, but I’ve never actually played through the entire game. However, after playing a couple hours of the game I can say that the movie accurately captures the spirit of the game: there is a nice mix of dual-wielding combat goodness and acrobatic jumping puzzles. I’ll have to spend more time on the game to see how it turns out.

It’s not the best movie ever, but it’s the best game movie I’ve ever seen by leaps and bounds. So good, in fact, that it made me want to start a column in this blog dedicated specifically to movies or TV shows that are somehow related to video games. I’ve got a few more lined up, but unfortunately I don’t think that any of them will get as glowing reviews as this one.