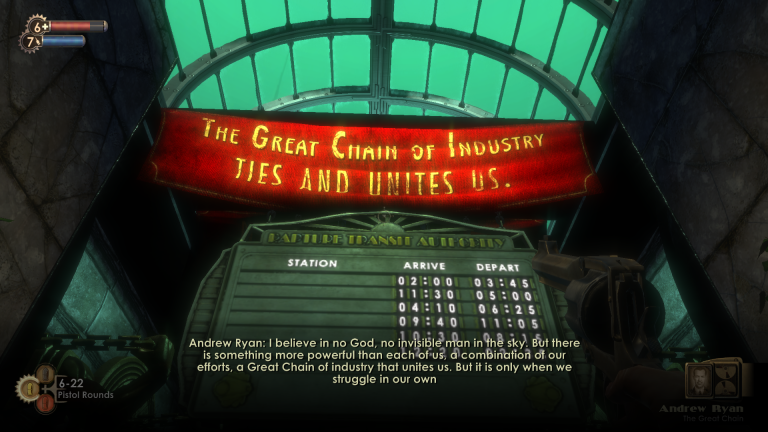 Bioshock | A Beautiful Nightmare Under the Sea

Rapture is the vision of the industrialist Andrew Ryan.

Somewhere over the Atlantic, your plane goes down. You swim up through the wreckage and see… a lighthouse? That lighthouse is the gateway to the underwater city of Rapture, where artists can create what they want, industrialists can build what they want, and scientists can study what they want. All of this is the brainchild of one Andrew Ryan, a visionary of the alternate history universe of Bioshock. And it’s just a coincidence that his name sounds like Ann Rand, I swear.

Welcome to Rapture... the only fantasy locale where there isn't secret treasure behind the waterfall.

While Rapture sounds like a good idea, some genetic tinkering has caused its denizens to go a bit off the rocker. And when I say a bit, I mean, kind of a lot. The “splicers”, as they are now known, roam the now abandoned, flooded halls of Rapture in tortured agony, lamenting their losses. What started out as civil protest devolved to civil war and then again to total terror.

The once vibrant stores of Rapture are still... vibrant, but now vacant as well.

Rapture is a freaky nightmare, and Bioshock is your opportunity to explore its horrors, and there are plenty of those. The game is a first-person shooter with some character customization role-playing game elements thrown in for good measure and a hefty dosage of horror. It was released in 2007 by 2K Boston.

Everywhere you go, Rapture is leaking and flooding.

Along the way to confronting Ryan, the player will find “plasmids”, which are genetic modifications that give the player special powers and abilities. Plasmids may, for example, give the player the ability to shoot lightning, ignite enemies, or throw swarms of bees at them. One thing that is excellent about Bioshock is that these effects can interact with the environment: shooting fire onto oil slicks causes the whole area to go up in flames, or shooting lightning at enemies in water amplifies the damage and paralyzes everyone standing in the water. While the plasmids are a lot of fun and powerful, I feel like their “ammo”, known as EVE, is a bit hard to find. And also, the “reload” animation for plasmids involves your character stabbing himself with a hypodermic needle and pushing blue fluid into his body… it’s unnerving to say the least.

Plasmids are powers that allow you to do fun things like freeze your enemies in their tracks. You can then smack them with your wrench to shatter them.

In addition to powers, the player also has access to a number of small arms, ranging from a pistol to a Tommy gun to a grenade launcher. Each weapon has several different types of ammunition, such as armor-piercing or anti-personnel. In addition, throughout the game there are a few weapon upgrade stations, which allow the player to choose a weapon to upgrade. This gives the player a way to customize the game to fit their playstyle. Unfortunately, I found that often the guns and their enhanced versions, felt as if they were lacking a definitive punch; even weak enemies often could take multiple rounds from a heavy pistol or point-blank shotgun blast. While I can suspend my disbelief in terms of the story (the splicers are all genetically enhanced killing machines), it makes the gunplay feel a bit clunky.

Splicers are the bad guys. They've gone mostly insane and are always dressed for a masquerade ball.

The splicers themselves are a sad sight: individuals who spliced up so much that they have lost their minds. Often they will have sharp objects for hands or will wear masks to hide their faces, for whatever reason. They are often rambling insanely right up to the point where they try to hit you over the head with a lead pipe. Big Daddies, the other major opponents, are dive-suit wearing, drill-wielding monstrosities that care for nothing but the protection of Little Sisters. Big Daddies are some of the toughest opponents in the game, though luckily they are passive until the player engages them. With only about a half-dozen kinds of splicers, the game is a bit lacking in types of enemies.

Big Daddies come in a few varieties, but they share a common rage against anyone who threatens a Little Sister. Pick your engagements carefully.

But you don’t have to take the enemies all by yourself. Rapture is protected by security cameras. Once they detect an intruder (you or the splicers if you’ve hacked the camera), they’ll deploy flying drones after the target. Luckily you can zap them and reprogram them to do your bidding. The hacking takes the form of a tile-swapping mini-game.

All of this is well and good, but what makes Bioshock one of my favorite games to date is not necessarily the combat, but rather the atmosphere. The entire game is wet and dark and terrifying. Whether it’s seeing shadows in the corner of your eye, or seeing a message written in blood on the wall, or witnessing the tragedy of an exploding piano and its pianist, Bioshock will send a tingle down your spine at just about every turn.

Shadows are scary. But so is playing a piano loaded with dynamite.

The back story is told through the destruction of the once ostentatious city. Everywhere, Rapture is leaking and falling apart. The Art Deco architecture gives Rapture an old-fashioned feel, which fits perfectly for a city that was supposedly isolated from the rest of the world since the mid-twentieth century. Andrew Ryan’s vision of Rapture as a haven of art, science, and industry, all unfettered by government regulation, is present from the moment you enter the city and watch a short slide-show on the founding of Rapture. A banner reads: “No gods or kings. Only man.” These values are espoused by signs in the halls of the (now defunct) businesses in Rapture, whether they are casinos, strip clubs, cosmetic surgeons or fishmongers, all of which have fallen to the total chaos.

I'm going to give you a hint: it's not a baby in that carriage that the woman is caressing

The city is littered with tape recordings that you can pick up, each providing more insight into the fall of Rapture and the colorful characters that once inhabited it, and occasionally they are the character’s last moments. These monologues are accompanied with a portrait of the speaker, but there is no cut-scene or any such nonsense; it is up to your imagination to fill in the visuals to accompany the horrors that you hear. And trust me, if you have a vivid imagination, this can be scarier than any graphics.

No underwater city is complete without a haunted strip joint.

Though there are many splicers and a few Big Daddy/Little Sister combos around Rapture, the city is otherwise deserted. Rapture’s major players are constantly vying for your attention by giving you objectives over the radio, but it is rare that you actually get to meeting any of the characters in person… and often when you do it is only to see them die at the last minute. The number of characters that don’t die and don’t want to kill you you can count on one hand… at most. This gives the game a very lonely feel, which is exactly what the designers were going for.

I think it should be mentioned that the game is also a horror game. There are moments in the game that are gruesome and will twist your stomach into knots, so it’s best not to eat right before playing. There is writing in blood on the walls (frequently), and some very disturbing sequences of character deaths. This is clearly a game meant for adults.

A gruesome game, Bioshock is not for the faint of heart. I kept all of the images as clean as I could. You have been warned.

What makes me love Bioshock so much is that is a totally unique game. Its atmosphere is unmatched in any game I’ve yet played. While I may disagree with the political criticism that Bioshock is presenting, I do very much appreciate that there is political commentary going on in a game. ]The game is not unique from a gameplay perspective, the combination of weapons and plasmids is fun and well-executed, but not mind-blowing. If you are looking for a straight up shooter, Bioshock may good, but not the best out there. However, if you are looking to be spooked and submerged into atmosphere and creepiness, Bioshock is a must-play and a shining example of a game rising to the level of a work of art, and I highly recommend it.