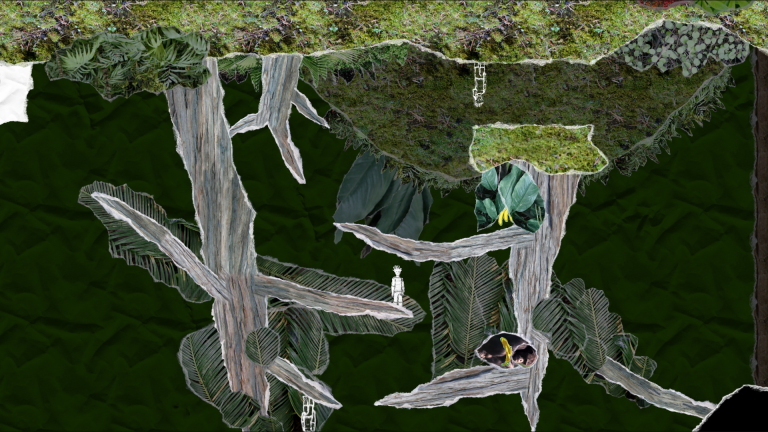 And Yet It Moves | Turning the World on Its Head

Changing the direction of gravity is a simple as the press of a button. But it is just as easy to go *squish*

This is coming a bit late in the weekend, I know, but alas, I was stuck doing chores most of yesterday, and then I lost the first draft of this review on account of not saving it. Blarg. The game of the day is And Yet It Moves, developed and published by Broken Rules, and it is a member of the Humble Indie Bundle 3.

Alack! There is a giant branch in my path! Whatever will I do...

Before I begin talking about the actual gameplay, let me just say that And Yet It Moves is one of the best titles for a game ever. I admit that I am a little sad that it is not a science fiction horror game in the same vein as Dead Space with a name like that, as there are so many great lines that could end with the phrase “…and yet it moves.” But that is neither here nor there.

Now, onto the game itself (who knew?).

And Yet It Moves is a platform jumping game with a unique twist that I have never seen before in a game: the player has the power to rotate the entire game world in 90 degree increments. This rotation affects the game’s gravity, which is always “down,” and is the basis for the entire game.

When you fall just a little too far, your character spontaneously disintegrates into a dozen pieces.

Wow. This rotation is a lot of power and it is somewhat difficult to get the hang of. I spent the first fifteen minutes or so of play trying to get the hang of it. Often I found myself not remembering which button rotated clockwise and which rotate counter-clockwise, and which flipped the world 180 degrees. While the player may have the ultimate power to turn the world, the player’s avatar falls victim to gravity very easily, so planning jumps and rotating the world at the right time are keys to success.

These bats will always gravitate to the "top" of the level. This is useful for using them against the evil lizards.

Luckily for the less spatially talented of us there are numerous checkpoints throughout the levels, so when you meet a grisly, gravity-induced end, you’ll only have to do a few jumps again, rather than the entire level. These checkpoints also point the direction which you need to go, which is immensely helpful in a game where the traditional left-to-right side-scrolling paradigm has little meaning. There were a few open areas where I lost my sense of direction, but it was nothing that a suicidal jump or two to see what was nearby couldn’t fix.

Several of the levels take place in high trees, which sway in the wind. Careful: occasionally their branches will breach if you stand on them too.

There are gravity puzzles throughout the game in addition to jumping/navigational puzzles. For instance, on one of the earlier levels, a rather nasty lizard was blocking my path. In order to deal with the reptile, I had to convince some bats that the uppermost portion of the cave was in fact in the direction of the lizard. The bats then subdued the lizard, which allowed me to pass.

It must be said that And Yet It Moves is a highly stylized game, clearly created to represent a paper-based art project. The environments have rough edges of paper tear marks, similar to what may be found in a hastily-constructed collage. The player’s pencil-drawn avatar contrasts starkly with these environments, making it easy to see the avatar at all times.

Nothing sedates an angry monkey like giving it a banana. Luckily gravity was on my side on this one.

While I understand the need for the contrast, I feel as though the player’s character is a bit out of place with the colorful environments, and I question the designer’s choice to deviate from the style of the environment. Or perhaps it is the other way around, that the environment deviates too much from the protagonist. In either case, for me, it just didn’t quite fit right.

Here water drips down from the stalactites, but needs a little help if it is to erode the floor for me.

And Yet It Moves is a good game, but not a great one. It is a bit too one-dimensional to be counted among my favorite indie games, such as Braid or The Misadventures of P.B. Winterbottom. For one thing, there is no real story, no reason why my avatar is navigating these levels.

Not only does the plot of the aforementioned games add to the immersion and add cultural significance, but it also gives the game a change of pace. With And Yet It Moves, the player navigates a level, and then a level loads and they navigate another level, and then the game loads another level… there is nothing to set the mood and there are no real rewards for completing levels.

All that being said, I have had several hours of enjoyment with the game. While it is not my cup of tea and I doubt I will play through the whole game, it is definitely an interesting concept and I commend the developer for taking such a risk and pulling it off successfully. Perhaps with a bit of tuning and the addition of some pacing, I could get into And Yet It Moves Too.