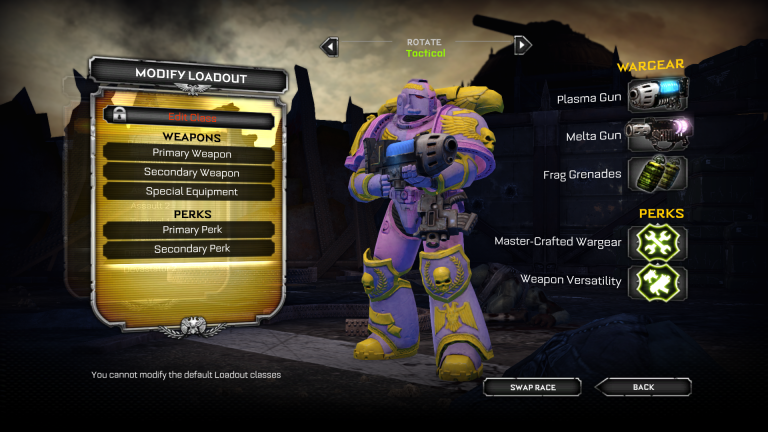 Space Marine | A Week of Multiplayer

I know it’s been a while since I’ve been around. Things have heated up and work, but you don’t really need to know that, all you need to know is that Warhammer 40,000: Space Marine is out. And its multiplayer is quite fun.

The game uses a “level-up” system that is popular among modern action games: the player accumulates experience points for winning games, killing enemies, completing achievements, and so forth, and each level unlocks new classes, weapons, or perks. While these new treats affect gameplay, they are not so drastic as in an RPG, where a level 5 character has virtually no hope of overcoming a level 40 character. Even the basic Bolter weapon can get the job done just fine, especially if you work with your team.

Ah-ha! I have created the amazing My Little Pwnies chapter! To battle!

Devastators tend to overcompensate with their weapons more so than the other two classes.

My beloved Assault Marine. In and out in a hurry. The jet pack is probably the most fun I've had in multiplayer for a long while.

All of the current multiplayer action is team-based. Players are automatically assigned to a team of either the Space Marines (referred to as “Loyalists”) or Chaos Space Marines (“Traitors” or “Heretics”). After being assigned a team, the player can choose one of three classes: the Tactical Marine, Assault Marine/Raptor, or Devastator/Havoc. The Tactical marine has a large number of weapons to choose from and strides the line between firepower and mobility. Assault Marines are equipped with jet packs that allow them to fly high in the air and come crashing down on their enemies, finishing them off with powerful melee weapons. Devastators are heavily armored, slow moving behemoths, but they also have access to apocalyptic weapons, including a heavy machine gun and a plasma cannon that can destroy entire squads in a single shot.

Each class also has a set of additional bonuses, known as perks, which are gained by achieving in-game goals. Weapons and class perks are unlocked through general level-ups, but getting weapon specific perks require killing X number of enemies with that weapon, headshots with a specific weapon, and so forth. Choosing perks is an incredibly important strategic decision, as each perk is relatively powerful and you can only choose two. For instance, as an Assault Marine, I like to equip the Death From Above (more damage to foes when you land on them) and Air-Cooled Thrusters (you are able to use your jet pack more often) perks, which gives me the ability to maximize the shock value of the class.

Make Your Own Marine

"These aren't the shoulderpads you are looking for."

If want to be serious, I wear my "serious business" armor. Needless to say, this armor doesn't come out very often.

One thing that I love about Space Marine here are also an ton of armor unlocks, which made new pieces of armor available in the Customizer. The Customizer is a dream, and fits well with the tabletop heritage of the game. While not as extensive as some MMORPG character creators, it has a huge number of armor pieces that can be combined and colored into more than 39 septendecillion armor sets (give or take). I’ve made several sets with it so far and I have to say, that being able to express myself by running around in pink and purple My Little Pwnies armor has been amazing (it’s canon guys, I swear!). Now, if only they would allow you to upload your own badges.

The more players that stand on a strategic point the more quickly it goes over to your side. For the Emperor!

The amount of grenade-spam available makes some capture points no-mans-land. Cap it and get out of there ASAP.

Annihilation is a race to see which team can get 41 kills first. To be honest, I haven’t played this mode hardly at all. It seems that most FPS games use this mechanic, and while it can be fun, it just feels a bit too generic, as well as not really fitting the fluff of Warhammer 40,000, which is always more focused on controlling vital strategic points with no regard to the number of lives lost (think Imperial Guard tactics). However, it seems that teams of 8 can reach 41 kills quickly, so the games are over almost before they have begun.

The second mode is Seize Ground, where teams are rewarded for holding key points on the map, typically central locations or high ground, and strive to be the first team to hit 1000 points. If your team has more control points than the enemy, your team gains points. If you control the same number of points as the enemy, both teams slowly earn points. It’s a fairly standard approach, but I find that I prefer as it adds a more meaningful objective to the game and centralizes the action.

That is not to say that Seize Ground doesn’t have its downsides. Probably my biggest complain with this mode is that I feel like it is over just a little too fast. Matches tend to last 5-10 minutes, and I think I’d like it to be just a few minutes longer. My second complaint has less to do about the game mode itself and more to do with certain weapons and perks. Grenade spam on capture points, especially central ones, is a bit out of control. With a match being 8 vs. 8 and each player starting with two grenades, plus perks for an increased number of grenades and improved damage on them, there are grenades and charged Plasma Cannon shots, flying every direction. It makes for a hectic experience and I like that there are tools for strategic area denial, but given the short respawn times and power of grenades it is a bit much.

If team deathmatch or seize ground isn’t your preferred flavor of multiplayer action, fear not! Relic has decreed that a new multiplayer co-op mode, Exterminatus, will be launched next month. You and three buddies can team up against increasingly powerful waves of enemies.

A Week of Play (aka, Assault Marine QQ)

Assaults have the ability to jump up into the air and slam down on their foes. Mmm... tasty Tac marine.

The targeting reticle doesn't go as far out as in single player, but it is still a great way to surprise enemies or to hunt them down when they're wounded.

For the last week I’ve been playing multiplayer I’ve played the Assault Marine probably 85% of the time. I love it. Flying up into the air and smashing into enemies is great fun, though sometimes I feel just a bit underpowered. For instance, the Tactical Marine has access to a gun known as the Melta Gun. It’s basically a shotgun that is only really great at point blank range. However, as an Assault Marine, my primary weapon is a melee weapon, so it behooves me to get into point blank range. This would be fine if the Melta was comparable to one of the melee weapons, but it almost always kills in a single shot (even with a bit of distance), while the Chainsword takes 2-3 swipes to get the job done. Never mind that while you are swinging you are locked in animations and cannot move.

It just feels wrong that I can see someone (without them seeing me), fire off a few plasma pistol rounds into them, ground pound directly onto them, swing my weapon and connect, and they turn and melt me in one shot. Worse, Tactical Marines can use a perk to carry two weapons, so many (though not most) carry a Melta, which is a small price to pay for making it very easy to kill Assault Marines. I don’t think a large change is required to make this more equitable; my thought was to increase the disruption caused by an Assault crashing into someone so that then if an Assault misses the ground smash the Tactical Marine can have a bigger advantage, but if the Assault smashes into the Tac, it will tip the scales greatly in the Assault’s favor.

Overall, all of this is well and good. The classes all feel very different and suit the myriad of playstyles out there. You can snipe. You can use an automatic weapon and gun down your foes from a medium distance. Or a heavy automatic weapon and keep them pinned down. Or if you want to get up close and personal there are a number of options available. The maps are wonderfully detailed and fit the atmosphere well, and are, for the most part, well designed.

However, the developer Relic made two huge mistakes when it came to the multiplayer component of their game.

Huge Mistake #1: The in-game voice chat is horrible. Not only is there no option to control settings from within game, but there is no push-to-talk option. What? As much as I like listening to and coordinating with other players, it’s not worth it when I hear constant key-pounding, heavy breathing, nomnomnoming, echoes and ear-splitting feedback. Seriously, this is absurd. What this amounts to is everyone just hits “Mute All” every single round, so there is no point in even trying to coordinate with your team. Even worse, the “Mute All” button was only added a couple of days ago, so until then, you had to go through the roster every single round and mute everyone. Anyone who used this for 5 minutes would know it wasn’t going to fly with PC gamers. Completely unacceptable.

Huge Mistake #2: There are no dedicated servers. What, wait?! The game uses a Peer-to-Peer (P2P) system for multiplayer games, meaning that you simply choose which game type you want to play search for games and then are thrown into a game. I’ve never had it so that I can’t find a game within 30 seconds or so, but I also play during prime hours on the U.S. East Coast. The official Space Marine forums are alight with numerous people waiting 15-20 minutes to find a game, only to have it plagued by lag. For me, the connectivity has been acceptable; I’ve only had to leave games because my ping was unacceptable a handful of times.

However, more important than improving the connectivity for any given match is improving the ability for players to form a community and to tailor their experience. I have no way build a reputation by playing on the same handful of servers. No one ever says, “Oh hey, it’s Sunhawk! Keep your eyes to the skies!” More likely, such an interaction would be along the lines of “sup bro”, but I’ve never had anything like that because I hardly ever recognize anyone. Servers also would allow admins to customize the game experience to suit the needs of the players. Does everyone on the server hate the Master-crafted Wargear Perk (extra-powerful grenades)? Remove it from the perks available on the server. If I want to play an annihilation game with 410 kills instead of 41, I can’t search a list of games to do that.

It’s sad that such a great multiplayer game is marred by two really, really stupid mistakes. There is already a petition on the official forum to add dedicated servers (and it is at least 10 times longer than any other thread I’ve seen). Hopefully Relic will admit their error and invest the necessary resources into giving the fans something that they desire, so that they can create a community around this game that is quite frankly, a ton of boot-stomping, plasma blasting fun.

I’m considering doing a three-part YouTube series showing off some of the abilities of each of the classes. I think it might be something that would be fun, not only to film, but also to show off the varied playstyles, which is what makes Space Marine great.