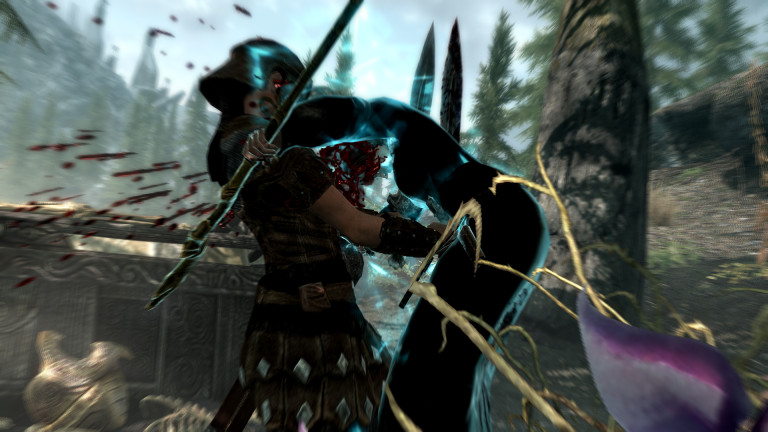 Skyrim Installed…and then it was Monday

This post contains a few minor spoilers for the introduction sequence of Skyrim.

It all started with a simple decision I made last Friday; I decided I could wait to buy The Elder Scrolls: Skyrim. That decision lasted until approximately 1:00am on Saturday, when I decided to buy Skyrim.

Skyrim's environments are positively stunning, rivaled only by the newly released Battlefield 3.

I liked Oblivion. It wasn’t my favorite game ever, but its gigantic open world was impressive and its combat simple yet addictive. But for whatever reason, I was totally stoked for Skyrim once I had purchased it. Luckily, I decided to get to bed before waiting for the download to finish, otherwise I doubt I would have had any restful sleep all weekend.

The view of the dragon from the chopping block is surprisingly good.

I got up early on Saturday. Much earlier than I usually do. Twitchy with excitement, I loaded up the game for the first time…

…and it immediately crashed after approximately five seconds of loading. I restarted my computer and tried firing up the game a couple more times. No dice. I quickly searched the Besthesda forums and found that it was a common bug (heaven knows why), and had to do with adjusting my sound output settings. Weird.

The game can be played from either a third-person or first person view. Look at that fuzzy armor!

After that initial hiccup, I was in and playing. I found myself and a handful of other prisoners on a cart being hauled into a small, Nord town. We were to be executed for being in the same general vicinity of the Stormcloaks, rebels from Skyrim who wanted an end to the Imperial rule. One of the prisoners attempts to run away, but is shot by archers and falls to the ground, rag-doll physics making his body slide and twist.

Occasionally killing an opponent will result in a brutal execution animation.

One of the Imperial soldiers calls me forward and asks me my name to record in a list. This becomes the character creation phase of the game, which is somewhat less daunting than it was in The Elder Scrolls: Oblivion. The reason for this is that in Skyrim you do not choose any skills or talents; those are picked up by your character naturally. This makes it so that you can just focus on the look of your character, and not get bogged down in statistics or too many decisions that will affect gameplay right off the bat.

But it's not all violence in Skyrim. Sometimes the folk just want to get down and party.

Right as my head was on the chopping block, a dragon swooped in and started to cause a general commotion. After a quick escape, I was out in the world and free to do, well, just about whatever I wanted. I was supposed to head to a nearby town to meet up with some guy, but I decided to just wander around the world instead.

Whiterun is a centrally-located city and one your first destinations. The architecture alone makes it worth the journey.

And it is a beautiful one. Skyrim reminds me of Northrend from the Warcraft series: cold, bleak, barren, but stunning and beautiful in its own right. The landscape is rocky and mountainous, but filled with evergreen trees. It reminds me of the Cascade Mountains back home in Washington. Except with more dragons and saber-toothed cats. The weekend was a blur of caves, dungeons and the frozen landscapes.

Bethesda spent hundreds of hours observing children's behavior to provide the most realistic dialog ever.

The character that I have decided to play is similar to the one that I played in Oblivion: a sneaky archer named Clover. Sneaking gives me a powerful first-strike capability, though some enemies aren’t taken out and must be finished off with my dual blades (or hammers or axes, I’m not too particular on that point). My character is all offense all the time (except when she’s running away at full speed). So far it has worked pretty well, but sometimes enemies will get the jump on me and that puts me at a severe disadvantage.

Skyrim brings the ability to wield two weapons at the same time for additional damage but with no ability to block.

Character progression in Skyrim is really cool and super easy to get into: you character has a number of skills that all begin at a relatively low level. You improve your skills by using them. After you have leveled up a sufficent number of skills, you are rewarded with a new character level, which gives a minor boost in health, magic, or stamina, as well as a perk point, which will significantly improve one of your core abilities. For instance, one of the early archery perks gives you the ability to zoom in while aiming an arrow, allowing for a more precise shot. I am really liking Skyrim‘s perk system. It works very much like the talent system in World of Warcraft, where every point feels like it matters and will significantly impact the rest of the game. The possibilities for character specializations is huge.

Huzzah! Dragon, you didn't stand a chance. I only had to load my game four times to defeat you!

Apart from the crash bug that stopped me from playing when I first installed the game, the most pain in the ass was the fact that I haven’t figured out if there’s a way to bind a combination of dual weapons. I can bind them to different hotkeys, but that causes the weapons to go into my right hand. What I’d like is to be able to control my left and right hands independently, or at least setup combinations that I can switch between as needed. It’s not a big deal to pause during combat and switch manually (and I’m sure there will be a mod for this soon), but it just reeks of console-itis and sloppiness on the part of Bethesda.

But that’s a relatively minor issue and didn’t stop me from having a wonderful weekend of dragonslaying. I’m totally stoked for going through the rest of this one and exploring every nook and cranny of Skyrim.

Now, if you will excuse me, I have some dragons to hunt!