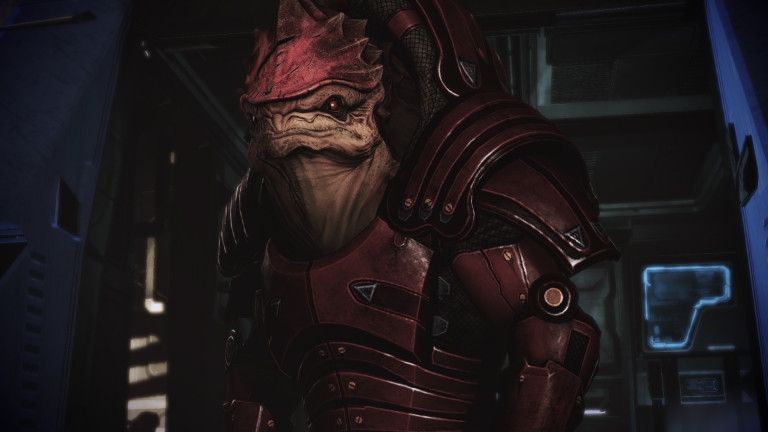 I picked up the Mass Effect 3 demo last week on Origin and gave it a run through or three. I haven’t touched the multiplayer (yet), but I’m going to break down top 5 things that excited me about the single player portion of the game.

5. Further Customization in the Combat Mechanics

Cover is once more critical to your survival. No one likes getting too many bullets in them.

Each skill now has 3 different evolution choices, as opposed to just 1. Choose to upgrade damage, area of effect, or recharge time.

I liked Mass Effect, but mostly for the story. The combat was a bit too clunky for my liking. Mass Effect 2 hit the nail on the head with the combat refinements, most notably the career-defining abilities. Mass Effect 3 looks to add even more refinements and options for customization: each skill now has 3 levels of power choices, giving the player even more strategic decisions to make.

Option A. Stealth attacks from behind.

Option B. Straight up the center!

My main character in World of Warcraft was a Paladin, but I also had Rogue and Deathknight alts; in Space Marine, I play an Assault Marine almost exclusively; in Team Fortress 2 my two most played classes were the Pyro and the Spy… are you seeing a theme here?

I love to get in the thick of it and whack people. There are two great ways to do this: A.) Sneaking up behind someone and administering a killing blow; or B.) Going straight up the gut, attacking from the front, weathering their attacks, and crushing their defenses with an overpowering attack (pixels are not people). As an infiltrator, I am excited for the prospect of trying out number A in Mass Effect 3.

I want to give Bioware a chance to prove that they can do better than Dragon Age 2. I was super excited for Dragon Age 2; I loved the first game’s drama, its combat system, and its generally awesome epic feel. Unfortunately, all three of these items were lacking in the sequel.

What a handsome battle-toad... I mean Krogan.

Dragon Age 2 wasn’t a bad game. It truly wasn’t. It was a decent game. It’s just that it paled in comparison to its predecessor and the changes that were made didn’t benefit the game at all. I believe that Bioware can do better than that.

From what I’ve seen from the Mass Effect 3 demo, it looks like they are on the right track. But then again, I felt the same about Dragon Age 2, so I’m trying to be more reserved in my excitement. Come on Bioware, don’t let me down!

Shepherd shows her dramatic face. Expect to see this a lot.

Number 2 is a big one: Mass Effect 3 is the end of an epic trilogy. Sure, I don’t doubt that the IP will show up in other places over the coming years, including books, comics, and possibly even more games; but the core story will be ending with the third installment.

Because the series was designed and developed as a trilogy, it allowed the creators to do lots of fun things, such as allowing players to carry their characters (and perhaps more importantly, their character’s actions) from one game to the next. And now that there isn’t a single, converging ending point, the story has the potential to diverge greatly based on player actions. Maybe one small decision in a previous game will cascade down and have a massive effect on the game. Maybe saving the Rachni or killing Wrex will be the end of the galaxy. We’ll have to wait (just a little longer!) and see.

Wow. This is an amazing moment.

It sets the mood for Mass Effect 3: I’m expecting the final game in the trilogy to be dark, gritty, and not afraid to throw out some heavy punches. I want to see more of this. Not because I’m rooting for the Reapers, mind you, but because I want the game to evoke emotions like this scene does.

Also, I want to find out what this is.

I also love this scene because it shows that Bioware understands one critical piece of video game theory: don’t assume that the player empathizes with anyone.

The little boy is seen several times in the first mission. First he is playing with a starship, then hiding in a vent, and finally climbing aboard an escape vehicle that is immediately shot down. Because he shows up several times, it allows the player to build a bit of empathy for the boy, which makes his demise much more emotionally powerful.

When I first watched this, I blurted out “You can’t kill the kid! They killed the kid!” I immediately tried to reload my game (which I couldn’t, as I was in a cutscene) in an attempt to save him. I couldn’t, and it hurt.