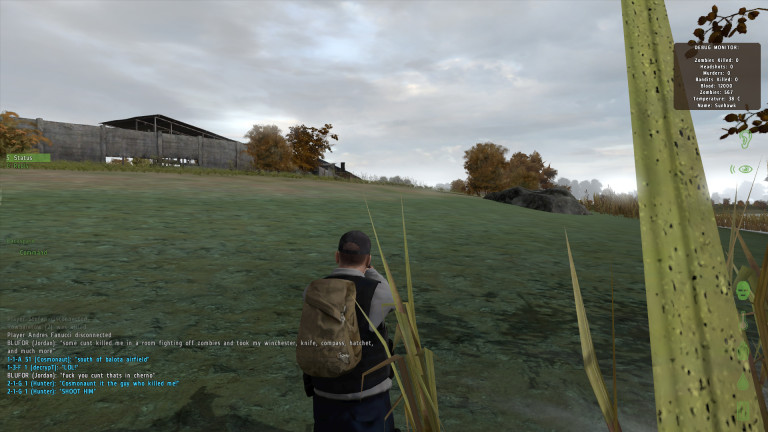 By now some of you may realize that I’ve been going through a bit of a Roguelike phase. I heard about a zombie apocalypse modification for Arma 2 named Day Z from the PC Gamer podcast a couple of months ago, and I had to check it out.

It starts like this: you join a server and spawn at a random location on the massive Chernarus map from Arma 2 with a bandage and are tasked with surviving the zombie apocalypse. What makes Day Z different from something like Left 4 Dead is that zombies aren’t your only worries.

While it is true that the zombies want to eat your brains (as they are wont to do), you can also die from not finding enough food (baked beans) or water, failing to treat injuries, or by being shot by other players. It’s a dangerous world out there and when you die, you lose all of your equipment and must start over from scratch.

A Roguelike MMO… kind of

Sneaking up on people will get someone killed.

The reason that Day Z works is its roguelike tendencies: you are limited to a single character at a time, though that character is persistent across all servers. And that simple fact makes Day Z wonderful. Let me explain.

If I am playing Battlefield 3, a sniper picking me off might slow me down for 5-10 seconds while I respawn and take away whatever good position I was in, but in Day Z a single sniper shot could end my character’s life and hours of progress. The bandit would have free access to any equipment that I was carrying, so there is definitely an incentive there.

However, firing a weapon is also incredibly loud, and it just so happens that zombies are attracted to sound and any nearby zombies would run and say hello. It would also alert any other nearby players. Also, if the sniper fires but misses and I shoot him or her with my pistol, they might kill me with their next shot but my own bullet would cause them to lose blood until they bandaged up. If they are out of bandages, then we both die.

Each engagement is a careful cost/benefit analysis with often fatal results.

The tension is palpable. Every single emotion that you feel is amplified. You are always in need of something and there is always something going wrong. Working with other players also adds another level of drama, as you have to make tough decisions about when to abandon your teammates (or when to stab them in the back and take their stuff!).

On the higher difficulties player identification becomes problematic (you no longer can “identify” who someone is), so the chance of accidental fatalities increases, and so does the potential for drama.

The map is huge: 15 kilometers by 15 kilometers, which takes a couple hours to run from one end to the other. The landscape is varied as well, with cities, towns, beaches, fields and forests to hide in. However, at some point you’ll run out of beans or run out of ammunition, and you’ll be forced to venture toward one of the zombie infested towns. You may find ammo, a shiny new weapon, a friendly player to team up with, or someone who wants to put their hatchet into your back. You will most definitely find zombies.

Each server can support up to about fifty players at a time. That doesn’t sound like a lot, particularly given the size of the map, but it is enough for you to want to move carefully and pick your engagements with the utmost care, especially once you gear up a bit and start looking like a juicy target.

After being knocked out by zombies, a friend pulls me to safety. <3

One thing that is readily apparent is the barbarity of the world. Perhaps it is just that the game uses a first-person shooter as its engine, but almost every one of my games has ended with me getting shot in the back by another player as I tried to wave them down for high-fives.

Though, I must be honest: one of my games ended with me running like a madman down the highway with a pack of about thirty zombies in tow. I eventually passed out from dehydration and was eaten. Nuts.

I didn’t mean to drop that

While it is a lot of fun, there are a number of things that bring Day Z down. My biggest gripe is the opaqueness of the inventory system: it is not clear what is going on at all. Occasionally I’d end up dropping items on the ground that I was trying to equip, only to lose them in the game’s long grass. Ug.

I often try to sneak by zombies, but sometimes you have to fight them. The zombies themselves move jerkily once they notice you which, combined with the game engine’s awkward makes them difficult to shoot. It’s a shame that in a game based on zombie survival the zombies don’t move in consistent manner. Combined with the zombies’ incredible speed, this can make taking down zombies a bit of a challenge. Still, the mod is in its infancy and hopefully this will be smoothed out over the next few iterations.

Two things that I hate: the inventory system and night.

Another thing that isn’t particularly fun is the game’s day/night cycle. Each server cycles through day and night every 24 hours, but is usually offset some amount so that players in that region can play during the day. The reason is that trying to do anything at night is completely useless unless you have night vision goggles, a rare item that I’ve never come across. Even putting all of my brightness settings up to full, I can barely make out a zombie six feet in front of me. It adds to the realism, but it detracts from the fun.

I see the value of having a day/night cycle and allowing for various play styles, but I wish the night was at least somewhat playable. Right now, I basically just leave the server if I find out it is night, simply because I can’t see anything. I would love it if it were hard to see or if my vision was blurry past a certain point, so hopefully this feature continues to be refined.

To me, the biggest take away from playing Day Z is that there is definitely a space in gaming for more roguelike games, especially in the MMO realm. The mod is very rough around the edges, but still one of the most emotionally-charged experiences in gaming.

It is also early in development and absolutely proves the concept of a survival-themed zombie apocalypse game. I know that the success of Day Z has prompted it to be included with Arma 3, though I think it should be an entirely separate product, managed by a separate set of developers so that it can get the attention that it deserves.