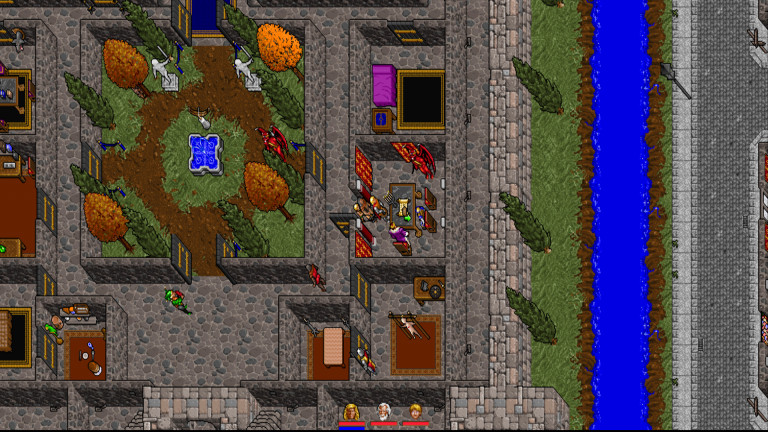 Ultima VII: The Black Gate | Blast from the RPG past

I can’t believe that he left his tools laying on the ground.

I decided to give Ultima VII: The Black Gate another try. I played the game back in the early 1990s (probably around 1993), but the only part of the game that I remember was going around and attacking literally every NPC I could find. Needless to say, I’m trying a slightly less psychopathic playthrough this time around.

Ultima VII is a role-playing game where you play the Avatar, a hero transported via magical portals from Earth to the world of Britannia, where the esteemed Lord British rules over a medieval fantasy world. You arrive on the scene of a grisly murder; poor Christopher the blacksmith has been ritualistically quartered and his gargoyle assistant impaled with a rake. The Mayor of the town of Trinsic tasks you with uncovering the murderer(s) and away you go.

Lord British is a swell guy. He’ll point you toward the bad guys, give you armor and weapons, and even runs a nursery to boot.

You relate to Polly what you heard Thurston say about her. She is taken completely by surprise. “Thurston really said that about ! I have always liked him, but in trusth I have always thought I was not good enough for him!”

The only other Ultima game that I have played to any extent is Ultima Online, and its MMO components drowned out any similarities to the plot-driven Ultima VII. Most of the time spent playing The Black Gate is conversing with Britannia’s various NPCs through rather complicated dialog trees. The amount of dialog is staggering: every character has a story to tell you; whether it is how their son was arrested for stealing apples or how cute they think the local barmaid is. (And yes, you can go and play matchmaker if that’s your fancy). These stories often lead to sidequests and generally flesh out the world.

On the flip side of traversing the long dialog trees there is the game’s combat system. You’ll find all manner of weapons and armor in Britannia: from daggers and swords to bows and muskets. Combat is real-time and often over quickly, as computer-controlled characters auto-attack one another with whatever weapons they have available. You can also cast spells from your spellbook, but I haven’t had the opportunity to try this out just yet. There are also some general AI instructions that you can give to your party, but again, it’s something that I haven’t delved too deeply into just yet.

This is why I don’t go to farmer’s markets.

I’ve played several hours of Ultima VII over the last few days, but I’ve fought only a couple of battles: I dispatched a few swamp snakes that slithered at me as I left Trinsic; and the second one, where I *accidentally* stole a bit of fruit from the farmer’s market and ended up butchering several guards in self defense. The rest of the time was spent wandering through Trinsic, Britain, and Cove, learning the latest gossip, trying to recruit companions, and searching for clues.

I took a stab at playing the game on my laptop a few months ago, and I got a bit further there than I am currently. That play session had a few more battles, as I ran across several packs of unpleasant mages and bandits while traveling throughout the mountainous regions of Britannia. Even on my ancient laptop the combat is over so quickly it is hard to enjoy; I might look for a way to tone down the speed at which the battles unfold.

Doesn’t everyone stuff ten loaves of bread into their backpack before going on an adventure?

The game shows its age. Like Star Control 2, the game does nothing to manage your quests so it’s best to knock them out as soon as you hear about them, lest you forget about them entirely. In the same vein, inventory management is atrocious and painful. Each character in your party has his or her own backpack which can hold a certain “volume” of items, which can be extended by putting a bag into the backpack. In addition, each character has a total weight that they can carry, measured in stones. The combination of these two systems of inventory management makes it less clear when one can pick something up; especially because there isn’t a way to see if something will fit in a character’s backpack without trying to stuff it in. It’s frustrating to see a juicy new set of armor on the ground but not be able to pick it up as it “Won’t Fit”.

The moongates allow you to travel quickly across vast distances in the world, but sometimes they malfunction and electrocute you instead.

It’s not just picking up new items as well; it is also managing the items in my bags that I found frustrating. I would arrange items in some kind of logical fashion, such as putting all of the weapons in one corner of my bag, while putting my provisions in the other. To my dismay, when I re-opened my bag sometimes the items would be in a seemly random pile that I’d then have to sort through. Yikes! This doesn’t happen all the time, but I can’t figure out why it happens.

I’m not sure if it is a function of my computer being too powerful for the game made in 1992, but I found myself spending more time feeding my people than doing just about anything else in the game. Every time I would run through the street for a while my companions would start complaining, “Is it time to eat yet?” I thought that adventurers are supposed to be able to survive for weeks off of a slice of stale bread, but clearly they need three square meals a day.

I decided to try a play through of the game using Exult. Exult is a modification that allows the game to run at higher resolutions and fixes some bugs in the original code. So far, the game seems to be running quite nicely and I haven’t had any problems with the mod, though I’m a little concerned that there appear to some game-breaking bugs with it (according to the patch notes). I’m really just crossing my fingers and hoping that my game doesn’t get corrupted.

All of this being said, I am loving the change of pace that the game offers. There is so much text it is much more like reading a novel than playing a video game. It really shows the effect that dialog has on games and storytelling. As the player I am forced to pay attention to the dialog because the game isn’t going to pay attention for me and I’ll lose critical information if I don’t. It gives the conversations a sense of urgency that I find lacking in modern games. For instance, in Diablo 3, I would zip through pretty much all of the dialog. Not only because the story was bad, but because I knew that it doesn’t matter if I pay attention or not, because I could simply walk toward the flashing gold dots on my map and everything would be fine.

Adventuring is a tiresome business. That’s why Iolo and I are sharing an entire leg of mutton.

Playing Ultima VII again really puts into perspective how simple UI changes over the last couple of decades have completely changed how “turned-off” players can be. I wonder if there are other games that take a similar approach to the interface, but with more modern graphics and character development. I look forward to playing more, hopefully finally beating the game that stumped me so long ago.