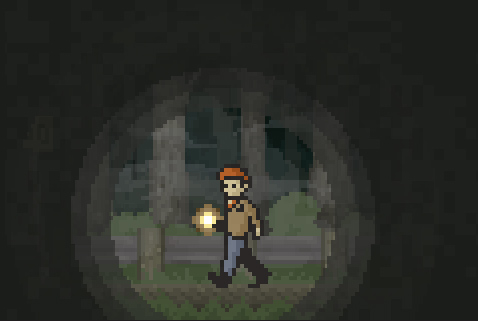 Home | One part Choose Your Own Adventure, one part Lovecraft

What isn’t horrible about waking up next to a corpse?

Thus starts the short saga of Home, an adventure horror game by Benjamin Rivers. Home follows an unnamed protagonist on his quest to figure out just what happened to make his shoes so muddy and his pants so bloody. What differentiates Home is that the story evolves and changes based upon the clues you find and the decisions you make. It *plays* like a short Choose Your Own Adventure ™ story meets Lovecraft, all while feeling “un-gamey”.

Home is one of the least game-like games that I’ve ever come across. And I mean that in a good way. You have very few options available to you: you can move left, right, look up, or inspect an object. Sometimes you get to make a decision and press Yes or No.There is no UI, no keys to go bind, no tutorial, no high score to worry about; all of this helped me focus on the story. The low-resolution graphical style worked well for me, as it provided some visual description but let my imagination fill in most of the horror. At any given moment while playing, all I was thinking about was how great the sound design was (drip, drip, drip) and what the psychological horrors awaited me in the next room.

Much of the story in Home is told through these dialogs that open when you interact with objects.

The game itself is quite short; I sat down and finished it in one sitting on two separate occasions (of about an hour a piece). While some gamers may want to get the most played time out of their dollars, I thought that any longer and it would become cumbersome to finish without taking breaks, which would disrupt the mood and shatter the suspension of disbelief.

The game does an excellent job at building tension. With every new clue I found, I kept repeating to myself, “I hope this doesn’t mean what I think it means.”

And usually it did.

The story itself isn’t the most original one out there (a protagonist with a memory problem is quite a common trope, especially in psychological horror), but the disorientation that this state provides is key to being able to tell a story where the protagonist is questioning his own sanity.

I only encountered one bug with regards to the weaving the the story. When I inspected an object the description that I received was obviously incorrect (it said that I had not found a particular person, but I had). There were a few moments where I felt that the story felt a bit stretched, particularly in the last act of the game.

It was as though the creator didn’t account for every possible combination of choices which left my character coming to a different conclusion than I did. Still, I admire the creator’s approach, and who’s to say that the protagonist hasn’t misinterpreted the whole situation.

One thing that Home does excellently is make you want to play it again. The decisions you make are binary and your character will often question your judgement or tease you with the path that you didn’t take, along the lines of, “I knew it was time to leave, but part of me wished I would have looked around more.”

At which point you can’t go back and look around more. It’s absolutely maddening… and I love it.

It gives you a reason to go back and see how the story varies from one play through to the next. I played through the game twice, and while the story was similar, the conclusions that my character came to about the grisly murder and the events leading up to it were different. The protagonist interpreted the clues one way, and I the other. I love this kind of ambiguity as then my own imagination tries to work out what happened and how it all ties together.

I think it takes a great deal of confidence to not explicitly tell the player what happened. Unfortunately, ambiguity is not a typical trait of video game stories. But Home isn’t your typical game. It isn’t even your typical adventure game. In fact, there isn’t a lot of game here at all. Sometimes that is a good thing, and in Home‘s case, I would say that it is.