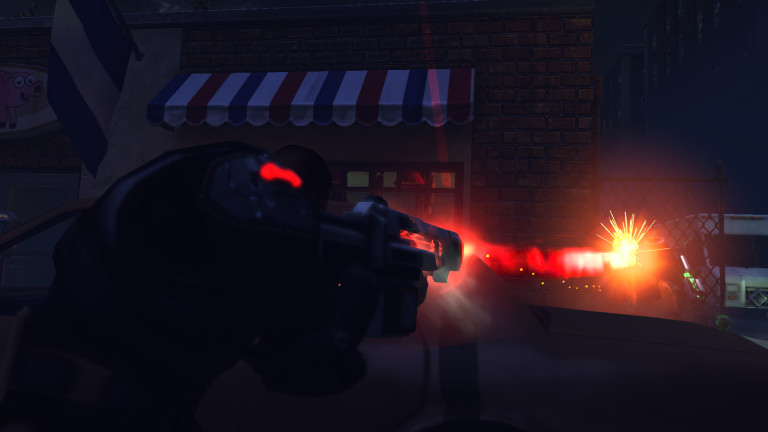 Operation Patient Breath, how I suffered my first casualty in XCOM

We had received word of alien abductions in Mexico and I sent the team to check it out. Skyranger landed just outside an abandoned convenience store and we had boots on the ground. There were a few cars parked along the road, so I ordered the team took cover behind them. Sergeant Fabian ‘Viking’ Bianchi led the way, encouraged by the newly manufactured laser rifle in his hands.

They are blocking the way to the ice cream truck, blast ’em!

As Viking approached a crimson car, he spotted a new kind of alien: they appeared to be a some horrible amalgamation of flesh and machine, a torso with long, spindly arms which ended in razor-sharp talons. Even though they lacked legs, the creatures had high mobility thanks to the powerful jet-packs they each carried. We designated them “Floaters”.

The three monsters leaped into the air and the fight was on.

Viking led the way with his brand new laser rifle.

Viking’s quick reaction gave him the first shot, nailing a floater squarely in the chest with enough laser to melt through the metal casing protecting its chest. It fell to the ground in a heap of blood and scrap.

Sq. Sarah Mitchell took cover behind a car adjacent to the one that Viking was taking cover behind and let off a few rounds with her pistol, doing some damage to one of the remaining enemies that was floating in the air as it prepared to get a shot at one of the team. Sgt. Veronique ‘Prophet’ Moreau had moved toward the far side of the building, and didn’t have a shot but moved into a position with better cover. Lt. Salazar ‘Bones’ Medina shot at the floater hiding behind a car of its own, but missed.

It was at that moment that Sergeant Joan ‘Demon’ Morrison took the last shot of her life. She didn’t see the floater hiding behind a car, but she could see the one threatening Viking and Sq. Mitchell just fine.

This floater is about to die… but not before he takes a shot at Demon.

She took aim and fired, her bullet smashing straight into the floater’s exposed forehead. She let her rifle down to survey the devastation as the monster erupted into a burst of flame.

It was only then did she realize that she was completely exposed; standing in the middle of a road with the nearest car 10 meters away.

The last floater flew up from its covered position and moved to attack. It was directly above Viking and Sq. Mitchell. However, it wanted to avenge its fellow machines, and it took a shot at Demon, and hit her shoulder, neck, and face. Her death scream was horrible.

Losing Demon was hard, but there were more aliens about.

Viking vaporized the final floater. After a few moments to collect themselves and reload their weapons, the sweep continued. Sq. Mitchell climbed to the top of the convenience store and spotted a few more sectoids on top of an adjacent building. The rest of the squad advanced and a short firefight ensued, ending with all of the sectoids dead and the squad uninjured.

Sq. Mitchell takes position on top of the store.

I could not believe that they had killed Demon. I sat in my chair with my mouth open for probably 15 seconds following her death. “They, they killed her!” She may not have been my highest-level soldier, but she had certainly showed a knack for sniping.

Viking was clearly the MVP of the mission. Or maybe it was just his laser rifle that was MVP.

What made this worse, was the fact that my game bugged out immediately after she had died, so I had to CTRL+ALT+DELETE and close the program. I wasn’t rage-quitting. I swear.

And then I had to go to bed. The whole time while I was supposed to be sleeping, I thought, “Is she still alive? Maybe it didn’t save properly. I mean, that happens, right?” Needless to say, it was a restless night. I even had to jump into the game the following morning just to see if she was still dead or not. I was that invested in the character that I had cultivated, and this was for only 4 missions. I played out the rest of the mission that evening.

I had better get used to my soldiers dying. This is going to be a long campaign.

I could have ordered Demon to take cover behind one of the cars. She may have taken a hit, but it’s unlikely that she would have died instantly. But then there would have been two floaters taking shots at me the next turn, so maybe two of my soldiers would have been killed. Also, cars make fickle cover as they are prone to explode. Leaving my whole team injured and exposed. I had to make a decision. I chose to fire.

This event really highlights what I love about games that are unforgiving: when your decisions matter, you get more emotionally involved. If I could have just reloaded my game to the start of the level, I wouldn’t have written this post about it. I wouldn’t have worried about the death of my soldier all night. I wouldn’t have cared.

I’m playing an Ironman game (Normal difficulty), which means that I get one save slot that is autosaved basically every time I make any decision. There is no save scumming (where you reload whenever something bad happens). I love Dungeons of Dredmor for this very reason. It adds a level of tension that most games do not have.

Sergeant Joan “Demon” Morrison, of Scotland, you shall be missed.

The squad was devastated at the loss of their plucky Scot. No one would sit at her chair in the nightly poker games and her excellent sniping skills would be sorely missed, but luckily Sarah Mitchell was showing great promise with the sniper rifle as well.

This is fortunate, as it was not as though the aliens were going to halt their invasion to give the team time to mourn.