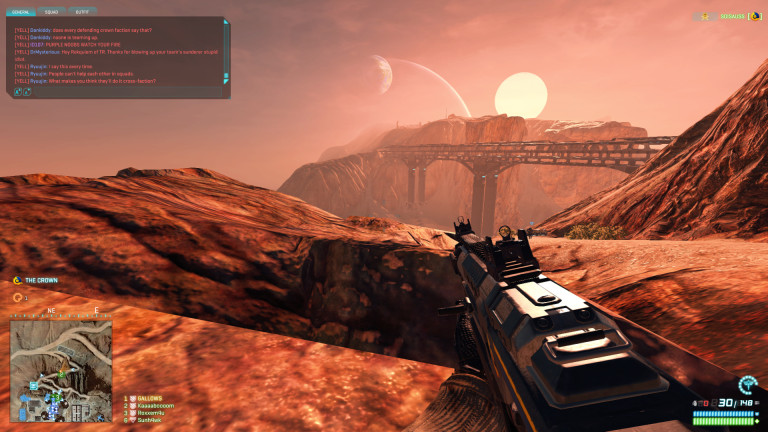 There’s a game that’s been chewing up my time for the last month. That game is Planetside 2.

I have spent a lot of time playing FPS games over my gaming career, especially ones that focus on multiplayer. For whatever reason, I hardly ever play through the single-player component of any action game more than once (the only one that springs to mind is Warhammer 40,000: Space Marine, which has a woefully short single-player experience anyway). So what is Planetside 2 and why has it eaten my time?

Me and my carbine.

Planetside 2 is a massively multiplayer first-person shooter released late in 2012. You pick a server, choose one of three factions to fight for, and then fight the other two factions for dominance of the planet Auraxis. The battle then rages across three continents (the desert Indar, snow-capped Esamir, and wooded Amerish), each one capable of supporting thousands of players simultaneously.

The continents are each gigantic and separated into small regions each controlled by a facility. You can take over a territory by taking and holding the control points that are scattered throughout it. Controlling the facilities gives your faction a steady stream of resources and a place for infantry units to spawn. One thing that the facilities that is both useful and frustrating is that all of the structures have a pre-fabricated feel. You’ll quickly be able to memorize the few structure types that exist in the world, but it also means that there’s not a whole lot of diversity in the in-door combat.

You are Jack of All Trades

The Sunderer is a mobile spawning point for your faction and the most important factor in taking new territories.

As your team captures various territories around the world, you accumulate mechanical, aerospace, and infantry resource points. You spend these resources on land vehicles, aircraft, and single-use infantry weapons (e.g., grenades and plastic explosives).

This brings me to my first problem with the game: I prefer to specialize in my skills in a game, and this system punishes my faction for it. There is very little that I’ll ever spend aerospace or mechanized resources on. I’m just not that interested in taking the time to unlock all of the vehicle upgrades, and so I’m less inclined to spend time in vehicles. I’d rather be a bad-ass infantryman than sit on a hill with a tank and slowly shell the Crown with my tank.

And so all of my aerospace resources and 90% of my mechanical resources go to waste, whereas my infantry resources are frequently at as close to zero as I can get them.

The Flash is a highly mobile machine… and one of the few vehicles I ever use.

I understand the point of this system: the developers want me to play with all of the vehicles and to experience the joys of combined arms operations. However, given how long it takes to unlock anything in the game, I don’t really see the point in me spending time in vehicles, when it isn’t something that I enjoy in the first place.

I wish that there was a way for me to convert the mechanized and aerospace points into infantry resources, or to hand them other to other members of my outfit, or even to just throw them into a faction-wide pool of resources that anyone could then use.

Or maybe I should just learn how to fly the damned aircraft.

The Medic has the ability to heal and revive allies. But they are quite vulnerable while doing so.

So now that we’ve got the vehicle issues out of the way, I’m going to explain a bit about how Planetside 2 handles classes.

There five main classes in the game: Light Assault, Infiltrator, Heavy Assault, Engineer, Medic, and then the infantry-vehicle class known as the MAX.

Each class has something unique that it brings to the table and make the enemies’ lives shorter and generally more miserable. Infiltrators have a personal cloaking device, Heavy Assaults can engage an extra powerful shield to soak up fire and can fire rocket launchers, Engineers can drop ammo packs and repair vehicles, Medics can heal and revive allies, Maxes can equip a weapon on each arm and dish out substantial fire (while taking a beating themselves), and Light Assaults have jet packs that allow them to bypass walls and ambush enemies from unusual locations.

Naturally, I find myself playing the Light Assault more than anything. I saw the jet pack and immediately remembered my old Space Marine days. I’ve really dug the class a lot. I generally roll with an underbarrel grenade launcher which is quite a nasty weapon in the right hands as it will one-shot any infantry (when the grenade actually decides to detonate, sometimes it doesn’t).

While I play Light Assault the most, I do find myself switching it up every now and again, mostly because of the advantages that certain classes give. For instance, if the enemy has a ton of air, I may switch to Heavy Assault and try to shoo them away with guided rockets. Or, if my team has a ton of tanks, I’ll switch to Engineer and try to keep the tanks alive. The point is that the classes feel quite different from one another and I like that.

What I don’t like is how long it takes to gain access to new tools and weapons for each classes.

The thermal scope limits your vision considerably and doesn’t offer magnification, but it allows you to see through smoke, in darkness, and silly Infiltrators who think they are cloaked.

That said, the amount of time it takes to unlock a new weapon is stupidly high and makes me cry just thinking about it.

Okay, I have played this game a lot. I’ve logged almost 100 hours in the last month (thank you, holiday break!). Let’s be incredibly optimistic and say that you can earn a solid 100 certifications an hour (which you can’t reliably, without being a subscriber and using consumable “boosts”).

That would mean that it would still take you 10 HOURS of play to unlock a single extra weapon that is valued at 1000 certifications (which many of the guns are, though many are lower). Most weapons don’t overlap with other classes at all, so effectively you are unlocking a single weapon for a single class, for a single character, on a single server. And that’s looking at the best-case scenario. If you ever happen to change factions or change servers or decide that you like playing Medic instead of Heavy Assault, you’re going to have to dump some serious time into getting the necessary certs.

And that’s just the stock weapon. Add-ons to the gun itself will run you from 30-100 certifications a piece, which feels much more reasonable. If I get a new gun, it would make sense that I can’t necessarily trick it out right away, that I should play with it a bit before it gets fully loaded.

So why would SOE make the certification costs for the weapons astronomically high? Well, it’s because they don’t want you to ever actually earn them with certification points, they want you to spend real money to buy Station Cash, which can then be used to purchase new weapons and skins. This shortcut allows you to bypass the need to earn thousands of certifications to get a single class going. However, the cost of the weapons is high in dollars as well. $5.00 USD gets you a miniscule amount of SC, what amounts to about one gun. So you’re paying $5.00 for a virtual gun… ouch.

Tanks for the cash!

It’s not that you can’t play the game the game without forking over some dough. In fact, I haven’t paid a dime and have enjoyed the game a lot. I don’t think that it’s pay-to-win, but it definitely allows you to have a much more varied experience when you play, since then you’ll be able to have multiple setups. As far as I know, every non-cosmetic item in the game can be purchased with certifications.

Battles for key locations can get big and confusing quickly. Bring friends for best results.

I don’t want to sound like I’m complaining about everything that Planetside 2 has to offer. It is an amazing game that offers good gunplay with an epic scale of warfare that not even Battlefield 3 comes close to.

For instance, a few days ago I logged in and just hit the “Auto-join squad” button, which threw me into a platoon with a bunch of randoms. We then started coordinating with several other platoons that were also forming up at the spawn location, and before we knew it, we had three dozen tanks ready to go smash up the enemy. The resulting column rolled through the roads and we quickly took over several key facilities.

Another game had me paired up with another random squad doing covert operations on one of the less populous continents, trying to lock down key regions and get out before the enemy (who had us outnumbered around five-to-one on the server) could retaliate.

One thing about the battles that I find somewhat frustrating is that the battles ebb and flow very quickly. Even the most difficult territories to take often swap ownership from one day to the next. There’s not a good sense of a faction slowly making progress or slowly losing ground. It seems like the real determining factor is who has the higher continent population. It’s not uncommon to see an entire continent swing from one faction to another overnight.

Each continent is large. Walking across it is not an option.

One last thing about the game that I found frustrating when I was learning the game is the complete lack of a tutorial, the unclear nomenclature from the lore (I still have no idea what the “ACU” actually is), and a frustratingly scare amount of information on the various weapons and vehicles in the game. This isn’t necessarily high-level operations stuff here; I just want to have the game mechanics explained in some amount of detail.

For instance, there exists in the game the concept of “influence.” Basically, territories that your faction owns exert influence over adjacent territories that enemies control, and those territories exert influence on yours. Somehow, I’m not exactly sure how, this influences how long it takes your team to capture the adjacent territories. I have a vague notion of how it works, but it’d be nice if there was a Planetside 2-pedia that listed everything out. Listing out all of the weapon characteristics (rather than just generic bubbles) would also be beneficial. I mean, it’s not like someone on the Internet isn’t going to go do it anyway.

There are a number of other gameplay tweaks that I would recommend, but for the sake of this post I’m going to refrain from elaborating more.

I like Planetside 2, I really do. The gun play is great, the combined arms aspect of the game is great fun, and it’s easy to get stuck in huge battles. But there’s definitely a lot of room for improvement, especially with the progression system. I hope that the game continues to grow and be successful.