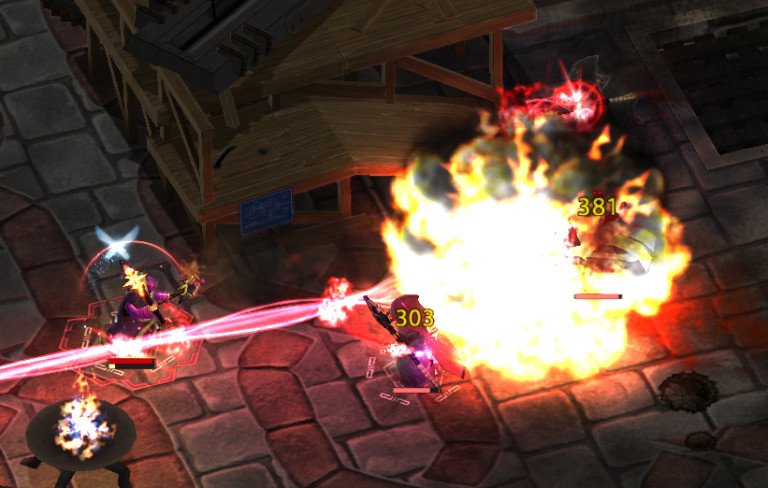 Frolicking in the sunshine often brings about Bad Things.

Your quest begins in a dungeon. Where else could it begin?

Magic happens. It’s present in almost every fantasy game out there. The problem with magic in games is that… it sucks. It doesn’t feel magical. Sure, players are often rewarded with beautiful spellcasting animations and snazzy, seizure inducing spell effects, but so often the player’s role is simply clicking the “Magic Missile” button and then clicking on a goblin.

I don’t feel much like a magician when I left-click on goblins.

What got me thinking about this is that I’ve been reading Lev Grossman’s The Magicians series, a dark interpretation of the kid-becomes-a-magician-and-journeys-to-a-magical-land story. I highly recommend the series. In The Magicians, magic is both incredibly dangerous and incredibly tedious. Reading it made me think about Magicka, the only game I’ve played where magic feels like it is powerful and out of control.

I installed the game and played for a half an hour or so last year, but I couldn’t really get into the game. However, last weekend, I decided that I would sit down and run through it. And I had a blast.

Magicka is an action role-playing game where the player takes control of an unnamed wizard on a quest to save the world. What makes the game unique is that the player prepares spells by combining elements and then decides whether to cast the spell in the direction of an enemy or ally, on the ground, or on him or herself. Each spell can have up to five elements added to it, and each modifies the final spell. This makes the spellcasting logical but also difficult to control in the games frantic battles. The game’s mood is humorous, and it is a parody of the fantasy genre.

Fights with unfriendly wizards can get complicated and confusing quickly.

Magicka’s environments take from the cliche fantasy playbook, from dungeons to lava caverns.

The story of Magicka begins in the magical castle, full of magicians-in-training each with a striking resemblance to the protagonist weaver in the old adventure game Loom. You are one of them. And then you start on a quest to save the world.

You are guided in your quest by Vlad, who is definitely not a vampire. Vlad will occasionally pop in and guide you from one level to the next. You’ll fight dragons, goblins, zombies and crazed dwarves. The whole game is very tongue-in-cheek and clearly making fun of just about every fantasy cliche out there. What other game out there has an M60 machine gun as a quest reward?

It took me around eight hours to beat the main story, so it was a little on the short side. There are some other mini-campaigns and multiplayer options that I’ve still got to explore.

Stone walls can be conjured to keep enemies at bay while you prepare additional spells.

Or you can mix in some fire and have a flaming stone wall.

Lightning has the advantage of jumping from one enemy to the next. Just don’t use it while wet.

Magicka breaks away from the fantasy trope of mana: you can cast the same spell as many times as you’d like; the only limiting factor is how quickly you can accumulate the “spheres” of elements used to cast the spells. The elements are Water, Frost, Fire, Stone/Earth, Protection/Defense, Life, Arcane, and Lightning. You can combine up to five spheres to cast each spell. However, some elements will counteract one another, so they cannot be combined, such as Lightning and Water.

There are also status effects that will alter your ability to cast. So, if you just ran through a river and are dripping wet, you had better not try to get a Lightning spell ready. Instead, dry off by targeting yourself with some fire. I like that the counters work on status effects as well.

The game does a good job of slowly ramping up the difficulty and providing enemies that have resistances and immunities to certain elements, forcing you to experiment with new spells and elements. And that’s a good thing, considering that it’s pretty easy to find a spell that is quite good and then keep casting the same spell over and over again.

While this might be fun for a little while, you really lose the beauty of the game, which is experimentation and unpredictability. It’s great to just mix things together and see what will happen.

Magic in Magicka is also great because it is dangerous. In the heat of battle it’s easy to accidentally cast the wrong spell, or to cast a spell on yourself instead of an enemy or to just plain old set yourself on fire.

While the balance felt right for most of the game, there was a point in the game I found myself in the underworld and and locked in a battle with Death. And that fight was hard, painful, and tedious. Essentially Death is completely invulnerable except for a split second when he runs at with you with his scythe and will kill you instantly if he touches you. You must strike him with a life spell to stun him.

However, for whatever reason, when I did this fight, my life spells would almost always miss, causing the entire experience to take a huge amount of time and ruin

Also, it took me about an hour to figure out that life spells would damage Death (as the spells kept missing), and instead I thought that the entire fight was avoiding Death while killing the minions that he periodically spawns. Each minion is weak against a single element, so you have to vary each of your attacks.

Basically, I spent two hours fighting Death and it was not fun at all, unlike every single other battle in the game.

Setting enemies on fire has never been more fun!

Magicka isn’t perfect. The game is a bit short and has a few camera issues. However, its treatment of magic is exceptionally fun and helps it overcome these minor setbacks. I hope that more games take a more active approach to spellcasting, and stray away from the “Click button to cast fireball” paradigm.

SUCH A GREAT GAME! LOVE IT! Great article brother. Keep up the great work!

I agree. We totally need to sit down and play the co-op!