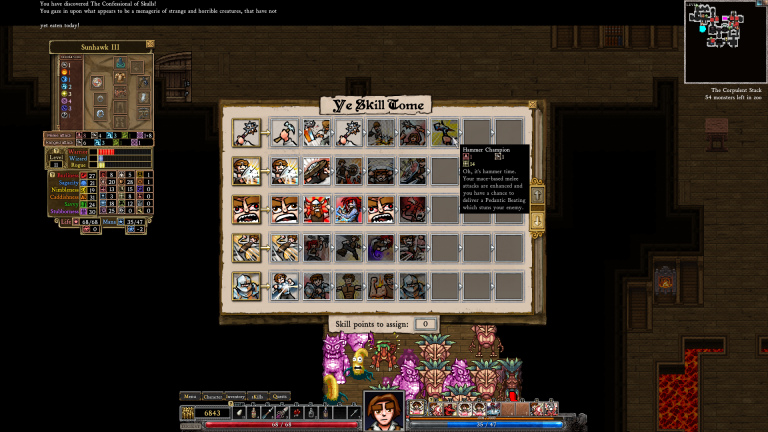 Dungeons of Dredmor | How Not to be a Vampire

As some of you may know, one of my favorite games is Gas Lamp Games’ excellent Dungeons of Dredmor. And over the last couple of weeks I’ve been experimenting with… Vampire builds!

Ever since I heard that Vampirism would no longer scale with Magical Power, but instead with Health Regeneration, I’ve wanted to play an extremely tanky vampire. My first endeavor into the blood sucking arts was the Vegan Vampire.

First of all, I just thought that the idea of a Vegan Vampire is hilarious for some reason. “I only eat organic tofu blood… or something.” But seriously.

My thought was that if I am going to need Health Regeneration, I might as well get as much as I can. Shield Bearer, Master of Arms, and Killer Vegan all provide substantial bonuses to that stat (with Master of Arms’ proc Walk it Off being the most bang for the buck there, in my opinion).

All of this Health Regeneration would make my standard vampiric attacks give a nice health boost, with the second level Vampire ability, Corpse Drain, is the real vampiric bread and butter, allowing you to convert any dead enemy into a fairly juicy health boost, to around 20 or 30 health per use. Awesome.

I included Fungal Arts, because if you aren’t going to be allowed to eat meat and vegetables aren’t going to give you any nutrition, you might as well eat some mushrooms. Also, the pet is nice and the extra mushrooms allow for a nice variety of utility. And Perception rounds out the skill selection with some nice trap detection (since traps are nasty against vampires).

The problem with this build is that Killer Vegan is annoying. That is to say, it debuffs you heavily if you ever attack animals, but as a vampire, animals are what give you the most health back when you attack them. Thus, one of your main advantages is rendered much less useful. Also, not being able to kill animals means that you get less experience, but more importantly, animals get in your way all the damned time, making it harder to move around the dungeon.

In the end, my character was weakened heavily by debuffs and I eventually was killed by an evil potato.

My second Vampirism build changed things up a bit. I decided to go with Axes, mostly because I’ve used Maces extensively and wanted to give Axes a try.

The core of the defense is the same, with Master of Arms and Shield Bearer providing solid Health Regeneration procs.

I also swapped out Killer Vegan for the trusty Battle Geology, providing even more defensive power (and the ability to kill those damned swarming Diggles without nasty debuffs!). Battle Geology also synergizes well with the heavy Warrior-ness of the build, since many of its abilities scale of of Melee Power, and provides a nice ranged attack in the form of Seismic Uppercut.

Archaeology gives some nice trap defense, as well as the still amazing It Belongs in a Museum for extra experience.

Finally, I thought it might be fun to try Communism for the (de)buffs, the Health Regeneration buff, and the self-heal, and also for a laugh.

The problem I ran into with this build is that Communist’s General Winter damage also affects the player. The damage isn’t a big deal, it is usually only one or two damage a turn. However, the problem is that
these ticks weakend the the procs from Shield Bearer and Master of Arms. This is absolutely killer. It essentially means that those procs are gone at the end of every fight, making it much less likely that you’ll be able to use Corpse Drain to heal.

This character is technically still alive, though I started getting so frustrated with Communist that I decided to try something different.

Like my previous two builds, The Double Axe Vampire uses Master of Arms and Shield Bearer both give heavy bonuses to Health Regeneration, which while it does not ever make you regenerate life passively as those wussy non-vampires do.

However, I replaced Communist with Dual Wielding, as I was under the impression that I could still get the Shield Bearer Defenses without a shield. I’m not sure if it affects everything, but I know I was not able to use some of the Shield Bearer abilities while dual wielding axes of doom, so that put some hurt on my style.

Another problem that I had with this build is a lack of good axes. Most of the game I actually was using a nasty dagger that I had found, so it definitely weakened my effectiveness.

My most recent and most successful (but also failed) attempt at Vampiring was a Pirate Vampire!

Having realized that Shield Bearer doesn’t help very much if you don’t use a shield (who knew?), I chucked it and went solely with Dual Wielding. Because I had trouble finding axes, I swapped out that skill for Swords instead. And the rapier or cutlass are much more pirate-y than dual battle axes, as awesome as dual battle axes are.

I added in Piracy for the solid utility that it provides. You get Swashbuckling, which prevents you from taking melee damage for several turns and allows you to heal up; The Black Spot, a powerful debuff against named monsters that might otherwise squish you; Mists of the Corsair for escape; and Broadside, which does some damage but also provides you with cannonballs that you can then throw at enemies.

Piracy also provides you with a load of extra gems. Most of these gems don’t help very much, but with the inclusion of Smithing, the emeralds become very valuable, allowing you to craft a pair of Emerald Encrusted Gold Rings early in the game. Not only do the rings provide a juicy 30 hit point bonus, but they also give you +2 Health Regeneration each. And, since you’ll have so many emeralds, you can gamble and Krong them a few times and simply replace the ring if it gets a particularly nasty curse.

Finally I replaced Battle Geology with Berserker Rage, because pirates don’t like land, and it gives some nice passive buffs to damage and resistance.

I was very successful with this build, getting all the way down to floor 11 with only a couple of close calls.

However, then disaster struck. I saw a Diggle God statue and decided to pray to it to see what buff it would give me.

Never pray to the Diggle God of Death as a vampire.

It was awful. The Diggle God of Death buffed me with some nice resistances and an area of effect proc that killed everything around me. However, the -25 Health Regeneration completely killed me. Even with all of my Health Regeneration from my skills and Procs, I could not recover health. And I’m not sure if this is a bug or not, but I would end up losing life from using Corpse Drain.

In the end, I burned out my wands, my mushrooms, my arrows, my broadside cannon shots. But alas, I could not find another statue to pray to.

Moral of the Story

Don’t pray to diggles. They are evil.

But seriously, I have had a ton of fun playing vampire builds and I highly recommend them. They are great because in certain circumstances they feel overpowered (like eating a corpse and getting 30 life from it instantly) and in other circumstances I felt like I was totally screwed because I couldn’t get my life back.

I might mix in Fleshsmithing or some other skill with a heal next time, but where’s the fun in that?