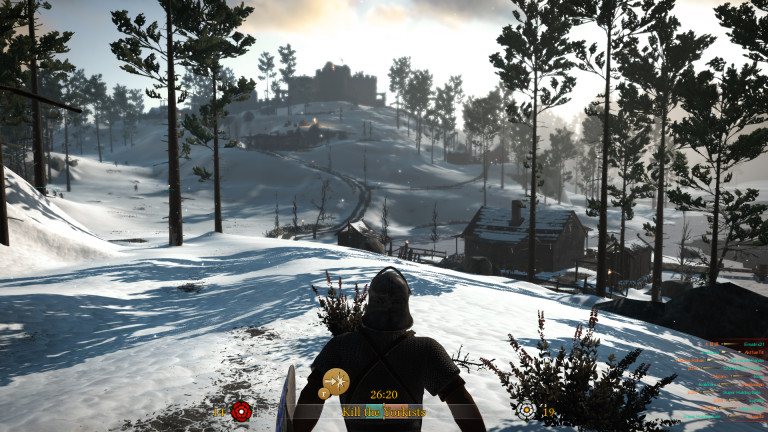 Some people ask the question, “Was I born in the wrong century?”

If you ponder this and answer that you would prefer to have been born in 15th century England, then you’ll feel right at home in War of the Roses: Kingmaker, Fatshark’s 2012 third-person action game. The game puts the player in the boots of a medieval warrior: you customize your armor, weapons, create your own sigil, and then do battle for the House of York or the House of Lancaster.

Fighting alongside teammates allows you to overwhelm a single opponent. Just watch where you are swinging.

War of the Roses uses a directional combat system very much like Mount and Blade. You move your mouse left, right, up, or down to set the direction of your attack, and then hold the mouse button to charge up the attack. Charging up attacks takes some time, but gives you a better chance of piercing your enemy’s armor.

When you release the mouse, your character will swing their sword/axe/polearm/club, hopefully cutting into the soft flesh of an enemy. You might want to be a little careful with your swings though, as they will damage your allies as well as your enemies.

In addition to close combat weapons, you can also choose to be an archer and fire from a safe(r) distance.

The amount of damage that you inflict on your enemies is directly affected by what weapon you are using, the type of damage it deals, what part of their body you hit, what type of armor they have there, and whether or not you charged your attack.

Parrying attacks works in a similar fashion: you have to choose which direction to defend against. A successful parry will also increase the time it takes your attacker to recover from their attack.

If you choose to equip a shield, you can simply hold down the right mouse to keep your shield up, but enemies won’t recoil as much from the attack, and you still need to be careful about attacks getting around your shield.

Swing and a Miss

Knocking down enemies will take them out of a fight, but taking a few seconds and executing them will prevent their allies from reviving them and give you bonus coins as well.

One aspect of the game that is quickly apparent is that each weapon has its own effective range and parts on the weapon that do damage. For instance, if you equip a Boar Spear, one of the longer range weapons, you can swing it as hard as you like at the enemy standing still directly in front of you, but you won’t do any damage unless you thrust it.

The reason is that the enemy is closer to you than the effective range of the weapon. Likewise, many of the shorter swords and maces require you to be on top of your enemy for the attack to even be in range (and it may still be blocked or absorbed by armor).

While this is intuitive, it also means that some weapons are much easier to use than others. Axes and maces tend to be harder to use, whereas sword have more generous hit boxes and are easier.

While I love the aforementioned Boar Spear, it does seem to have some wonky hit boxes: often I will see the tip of the spear pass through my enemy’s head, but the attack will not register as a hit. On the other end of the spectrum are the weapons that seem to always hit, like the dreaded Poleaxe.

All of this leads to an important aspect of the game: player positioning. Battles in War of the Roses often revolve around moving just into range with your weapon and attacking, and quickly backing out to avoid the counter attack. This holds true for most one on one fights, but as more players enter the battle it can get more complicated.

Do you try to jam yourself between enemies and force a series of duels, or do you take a couple of hits from an enemy behind you to finish off a wounded enemy your ally is attacking? Archers and crossbowmen can also pose a problem if left unchecked, slowly picking away at enemy forces or forcing them to move into a bad position to attack the archers.

All in all, it makes for a fun and ever shifting combat situation that feels quite skill based, with a bit of randomness from lag thrown in for good measure.

Creating your own custom profiles can be a lot of fun. Though expect some grinding to get everything you want.

Visors and heavy helmets give your face protection, but also obscure your vision.

There are a large number of weapons, armors, customizations, and perks that you can choose from when outfitting your character. Each customization requires a certain number of coins, which are earned by performing actions on the battlefield such as wounding or knocking down enemies and pulling allies up off the ground so that they can fight again.

The cost of new items varies wildly: a basic sword may cost ten thousand (10,000) coins, but another similar sword may be one hundred thousand (100,000) or even five hundred thousand (500,000). These outliers seem to be vanity items for the hardcore players (or players who want to spend real money to buy coins) and from what I have gathered from several weeks of playing is that they are not significantly better than their more affordable counterparts.

For each item you can purchase additional customizations such as a fighting style, the grind of the blade, the type of arrows or bolts used with it, the coloration of your armor, and, my favorite, the plumage on your helmet.

Because of all of this investment in a single weapon, it pays to choose your weapons carefully when first starting out. Unfortunately, while the game does show you some of the statistics related to weapons, including their range, damage, and speed, other statistics such as their ability to penetrate armor are hidden. This means you may end up investing a fair amount of money into a item and then decide that you won’t be using it as much as you originally thought.

Each item that you equip also affects your Encumbrance. As you add to your Encumbrance every action that you take, from running across the battlefield to blocking to climbing ladders, will take more time to execute. This is the way that the game balances the heavier armors: it may take more work to penetrate the armor, but a character with light armor will be quicker and may be able to control the pace of the battle more easily.

Giving yourself an awesome coat of arms helps other players remember you… and seek vengeance.

One thing that is pretty fun about War of the Roses is that you can customize your coat of arms, selecting a sigil and the background from a myriad of options, including checkers, diamonds, and stripes. This sigil will appear on your shield and certain armors, and is a nice touch that helps differentiate you from other players. Unlike the weapon customizations, this is totally free.

Sneaking up on enemies may not be 100% honorable, but it gives you a decisive edge.

War of the Roses is not the most popular game out there. There are only maybe a hundred servers total, and usually only a couple dozen that have players in them at any given time.

While it has been a bit annoying since I have not really been able to play the game types other than Team Deathmatch, I find that I enjoy the smaller population pool. I have only been playing for about two weeks, and already I recognize a fair number of players in the games. The smaller population means that players are also more likely to chat with each other as well.

For whatever reason though, the player base seems to be a bit more juvenile than I’m used to. For two players that will tell you “Well fought” after the battle, there’s one who will teabag you as though he just got out of his first match of Halo ever and thinks necrophilia is the funniest thing ever.

The game is also vulnerable to exploits and already I have seen probably a half a dozen players blatantly cheating, using some kind of speedhack to run around ten times as fast as other players.

In a game where positioning and footwork is important, you can see how much of an advantage that is.

There aren’t a huge number of good third-person action games that deal with melee combat out there (okay, maybe there are a ton, but these comparisons seem more salient).

The maps are not quite on the scale of Battlefield 3, but they are generally too big for 32 players.

When it comes to combat, I prefer the pacing in Roses to the more twitch combat in Chivalry. It just feels better. There’s more of an emphasis on character positioning and a little less on timing. Also, while the hit detection for certain weapons is questionable, overall the hit detection feels better in Roses. The customization is much deeper in Roses, leading to a wide range of play styles; although I will admit that I miss being able to throw javelins at people.

One thing about Chivalry that is superior is the map design. Everything is more compact, so it’s easier to work as a team, or in the case of a free-for-all, it’s easier to find someone to hack and slash at. Roses has much larger maps, but sometimes the scale makes it so that it’s harder to find enemies (and allies), especially given the slower movement speed of characters. The War of the Roses maps are generally pretty to look at, but have questionable balancing, spawn camping, and suffer from numerous “invisible walls” blocking off certain parts of the map that can be frustrating for new players.

Comparing the game directly with the Mount & Blade may not be as appropriate, as while the directional combat is similar, Mount & Blade is more about the open world and RPG character development, whereas Roses is solely about the battles. I think that from a technical standpoint Roses is better, in terms of music, character design, and even play control; but offers a less grandiose gameplay experience.

All of this said, I’ve spent plenty of hours in all three games and found all three quite enjoyable. I’d recommend War of the Roses: Kingmaker to anyone who likes team deathmatch games but is bored of the modern setting and is looking for something a bit different.

Or anyone who likes poleaxes, really.

One final note: the game does have a relatively steep learning curve, but keep at it and soon you’ll be slicing through enemies left and right. It’s all good fun.