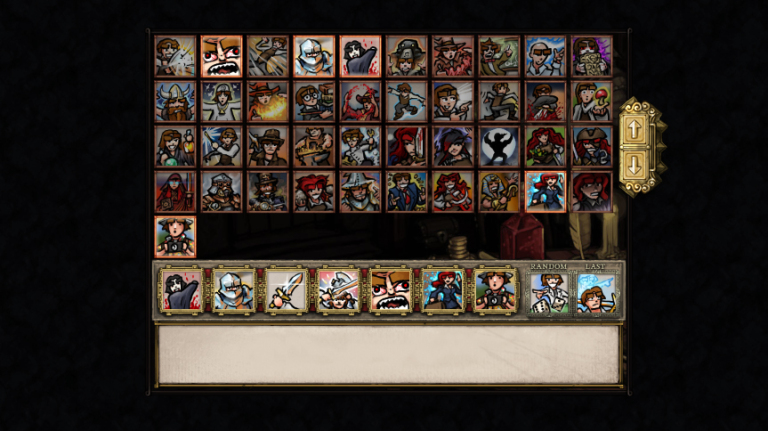 Another Dredmor build that nearly won

I was so close. While playing Dungeons of Dredmor on Going Rogue with Permadeath (naturally), I had Dredmor down to about about 100 life (out of about 2000), and then I died. It was one of those moments when I thought to myself, “I can take one more hit and then jump out.” 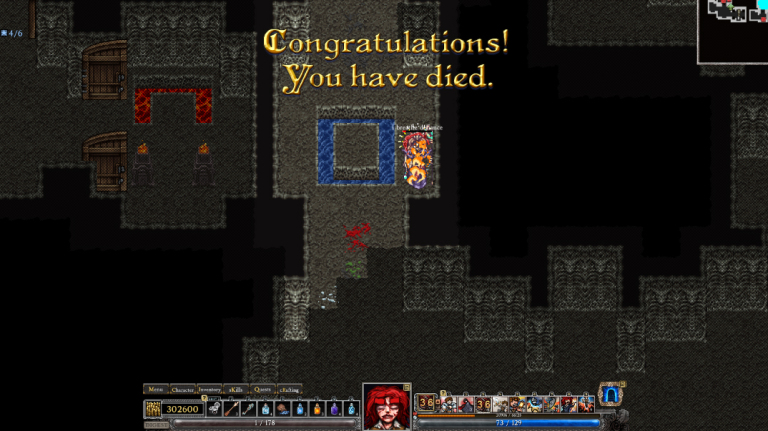 My character died at the hands of Lord Dredmor. Time to re-roll.

No, no I could not take one more hit. So instead of being victorious and patting myself on the back, I lay there at Dredmor’s skeletal feet in a pool of my own vampire blood, admiring the polish of his toe bones. There was much lamentation.

Here’s the build that almost won:

Like some of the other builds that I have written about, this one is built around Vampirism. This lets you have a large amount of healing throughout the game. Vampirism is so good that a lot of the fights in the game become trivial, especially those pesky Monster Zoos. 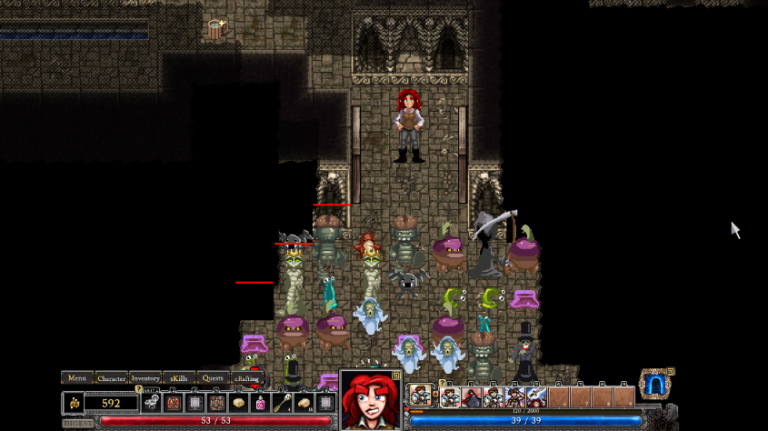 Monster Zoos are actually good news for vampires. Since you’ll have plenty of corpses to eat.

Unless you really enjoy just picking skills and then dying on the first level of the dungeon, I recommend taking Drinker of the Dead at level 2. Without it, I’ve found that you often don’t have the healing to keep up with the damage. With Vampirism you drain life based on what type of monster you are attacking: Animals give the most life, with Demons providing a little less, and critters classified as Others providing almost none. Drinker of the Dead lets you feast on any type of corpse to regain life.

Master of Arms feeds Vampirism like it’s nobody’s business by giving you solid bonuses to health regeneration, the stat that governs how much life you steal from enemies. Take care to note when you get the juicy Walk it Off +10 health regeneration procs and use Drinker of the Dead to regain a lot of life. The extra block and damage absorption means that the life you steal is going to be worth more in terms of effective health. 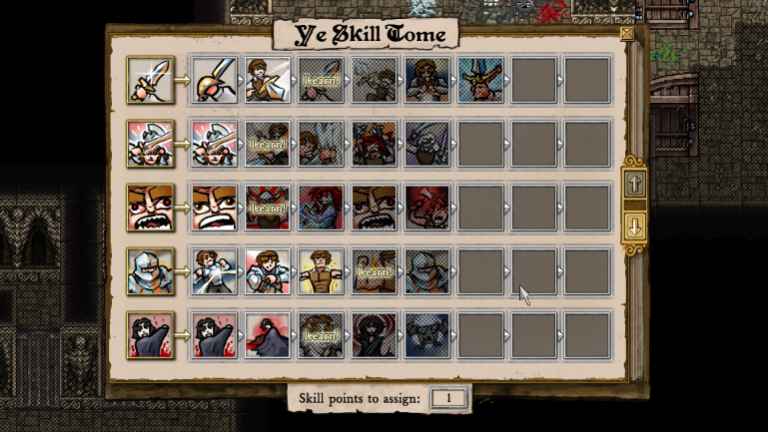 I tend to level up the defensive skills first, then go for the offensive abilities.

Many of my other builds double up on this health regeneration by also taking Shield Bearer, but I decided to give it a miss this run and substitute it out for Dual Wielding for additional damage instead. Having even just a single point in this skill gives you the ability to use two weapons, greatly increasing your damage output, especially in the early game. I eventually maxed out this skill set, but it was one of the last ones that I went for. Also, the counter chance boosts give you additional vampiric attacks for more sucking power.

I chose Swords for my main weapon of choice due to their prevalence throughout the game, and I suppose the bonuses to counter attack synergize well with both Vampirism and also with Dual Wielding. It also has a nice boost to Enemy Dodge Reduction, which can help bring down those tougher monsters faster.

I added in Berserker Rage for a bit more tankiness. It provides hit points being a Warrior skill set, some magic resistance from Ancestral Body Paint, and a bit of extra armor absorption with Even More Berserker Rage. I didn’t find it a particularly strong pick, but it does fit well Dual Wielding, both benefiting from being right in the thick of the fight. I might swap it out with something else for my next run.

One of the easiest ways to die as a vampire is by stepping on a trap. Or rather, stepping on a series of traps and being weakened, then falling to a few bad hits when attacking an enemy that you can’t drain life from. Given that you cannot suck any blood from a traps, any damage that a trap does to you can put you at a disadvantage in your next fight if it does not kill you outright.

To combat these nefarious traps, I chose to be a Tourist. This skill set gives one of the best anti-trap skills in the game: See the Sights, a buff for spotting traps and increasing your vision which you can keep on as long as you’d like for no mana cost. The Tourist skill set also provides a few neat perks: +1 health regeneration right at the start, and a way to recover health by eating items with Sample the Local Cuisine (Note: You cannot use this item on food when you are a vampire!). Its capstone ability, Get Away From it All, is so good it feels like cheating; it allows you to jump up a dungeon level at any time with no mana cost. You will drop a random item from your inventory, however.

The last key skill for the build is Magical Law. This skill set gives a way to spend your mana and offers some great utility. Polymorphic Injunction looks weak, but it can be very useful if you find yourself getting wrecked by a particular kind of monster. You can use it to (try to) turn Constructs/Undead into Animals (for vampiric healing purposes), or to change spell casters in a monster zoo into melee enemies, making mopping up the last few monsters easier. Also, this skill is very good at changing Blobs of Corruption, Magical Dragons, and Magical Golems into… anything else. Those monsters have a chance to corrupt your equipment with every hit, so swapping them out for another monster is great given the build’s limited ranged abilities.

Gag Order gives you another way to deal with casters, all the way up to and including Dredmor himself. I found the damage a nice way to soften up elite monsters as well. Finally, Writ of Counterspelling provides this build with some additional magical defense in the form of +50 reflection and +25 magic resistance. It may use a point of mana every six turns, but with Vampirism’s Psychic Vampire you can easily get that mana back.

Overall though, I found the build to be quite solid. You have a good amount of health regeneration and Vampirism keeps you alive. Occasionally I had to watch out for elite mobs on the later floor taking off half of my health in a single hit, but a quick retreat and a Gag Order or two later, and they were finished. You also get good damage from dual wielding. This comes at the cost of limited ranged damage, so it is possible to get in a situation where you do not have any corpses to drink from. 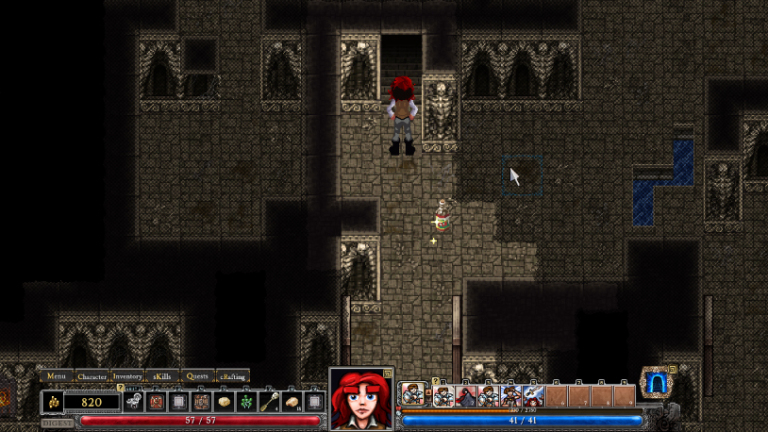 Well. Time to continue on.

I was about two turns away from killing Dredmor himself, but then I got greedy. Oh well. I’ll get the blighter on the next time round.