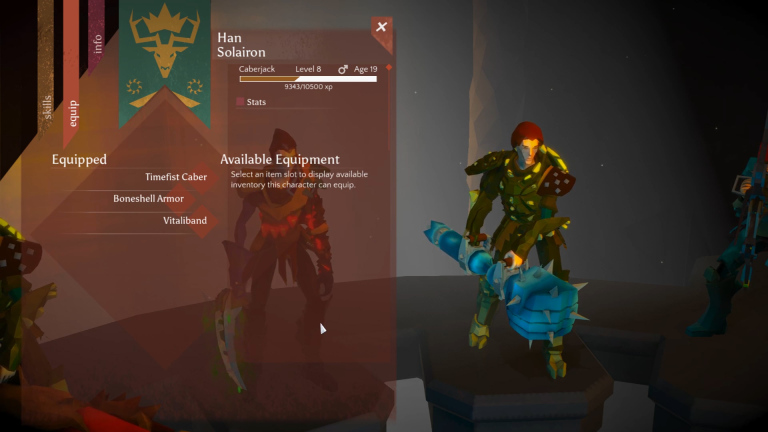 Day 5 went off without a hitch! This was quite a relief, given all of the technical issues that I’ve had. A couple of the episodes didn’t quite have as nice audio quality as I’d like, but they seem pretty good. I suppose “pretty good” will have to do when I leave my fan on and it mucks up my sound.

On the bright side, I’ve noticed a significant increase in the audio quality overall with my new microphone. It’s been going well for me, and it’s nice that I don’t have to wear my lapel microphone anymore.

I began the day with a relatively quiet battle followed by one of the more intriguing random events in the game: a balloon man offers one of my heroes a ride over the vast corruption.

In the past, this has never worked out for the said hero, but maybe, just maybe, season 3 will be different.

Lay off the Hooch

Episode 19 begins with me taking advantage of an item that up to this point I have neglected: the haste hooch. Now, I didn’t want just one character to have access to it, so I decided to give it to an Alchemist who had the ability to throw items.

Needless to say, the hooch is extremely powerful, giving a beefy +4 to movement speed for a turn. [Un]fortunately, it also provides the “drunk” status for the rest of the mission as well. Now, I didn’t know this, and decided it would be a good idea to throw the hooch so that all 5 of my heroes could take advantage of it.

What this means is that my heroes spent the second half of the battle completely plastered. Lesson learned.

Arm Wrestling and a Time Fist

The arm wrestling random event is always one that I find a little odd. I’m not sure exactly why I am able, as the immortal ruler stuck in the throne, to arm wrestle someone but not get out of the chair. In any case, I’ve had bad luck with breaking people’s arms in the past (in the game, not in real life, although I did fall off of my bike last year and break my arm), so I decided to take it easy with this one.

Back to the Future

Although I equipped the new Cadence weapon, the Time Fist, for one of my Caberjacks last mission, I failed to notice that the knockback is replace with a “knock this enemy into the future” button. I decided this time to try it on a Rupture.

I wasn’t sure how deep into the future it would take the enemy. One turn? Two turns? I don’t know for sure how consistent it is, but it at least knocked it into the next battle.

Let’s do the time warp again!

Which brings me to the final episode of the day, episode 22, in which the lovely Rupture, hurled through time, and through space, arrived to join my battle.

It is sad to think that the Rupture had but a few scant moments to enjoy its new surroundings, not only new scenery much more interesting than the last, but also new friends like Twitchers.

The Rupture was quickly felled after its epic journey through time.

However, this does make me wonder if it is viable to go for a 5 Caberjacks with Time Fists strategy, and constantly knock every enemy into the future, over and over again. I wonder if this would work on the last mission, pushing the Cadence deep into the future?