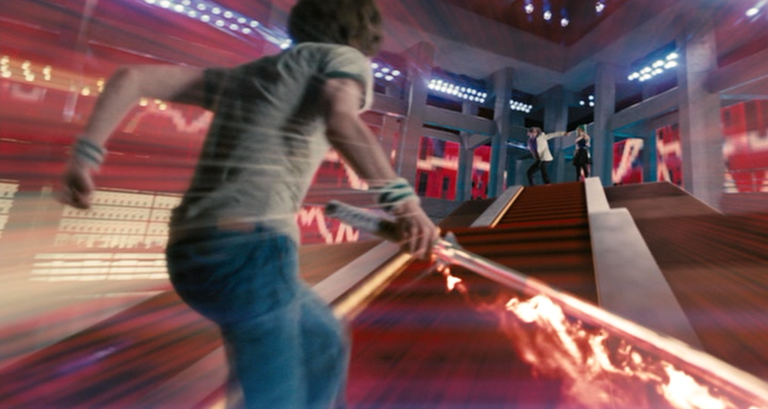 Scott Pilgrim vs. The World | Highly stylized and totally awesome.

On Monday I was blown away… literally. A nasty storm swept through the area and the winds threw me to the ground and pummeled me with miscellaneous debris. But I have rebounded, and now must blog about a game movie.

Scott initially tries to woo Ramona by impressing her with Pac-Man trivia. It doesn't end well.

Video games are at the core of the movie's style and plot.

Scott Pilgrim, played by the eternally baby-faced Michael Cera, is a young man who is just starting to get going in the world. He owns very little, he’s between jobs, but loves music and plays bass in a band, Sex Bob-omb. After being heartbroken for some time, he starts dating a high school girl, Knives (played by Ellan Wong), who is obsessed with Sex Bob-omb. However, the relationship is shattered when Scott meets pink-haired Ramona (Mary Elizabeth Winstead), an American girl who is running from her past. Unfortunately, the two are not allowed to date until Scott defeats Ramona’s seven terrible exes and he ends his relationship with Knives.

Michael Cera charges into battle with a flaming sword, twisting this way and that.

After pulling a hammer from her purse, Ramona kicks some serious ex butt.

The plot is structured like that of a video game: there are seven exes that Scott must defeat in order to get the girl. The exes each have their own powers ranging from skateboarding to flame throwing magic to superrockstar-level bass skills derived from being vegan… the usual. The fight scenes have a metric ton of choreography, all of which is outlandish, surreal, and fun.
Between the confrontations, there is lighthearted romance and a tiny bit of band drama, but it is never taken too seriously. As Scott conquers the exes, he begins to learn more about Ramona and her past, and reflects on his own shortcomings and mistakes as well.

After defeating enemies, they tend to explode into coins. Which never made any sense at all in games, so I can't fault the movie for it.

The movie is absolutely littered with video game cliches and gags. For instance, at one point Ramona joins a battle with an ex, and she pulls a massive two-handed hammer from her purse (I had always wondered). Obviously, this is making fun of the ability for characters to carry ridiculous amounts of gear in games. Also, when each ex is defeated, they explode into coins and award Scott points, not unlike the monsters in any number of role-playing games. It makes no sense whatsoever, but it is just how the games work. Video games even affect the plot; at one point Scott receives and extra life, which gives him the opportunity to replay a part of his life.

This is how my face looked after watching this movie.

The music and sound effects are clearly inspired from the old Nintendo Entertainment System classics, with that 8-bit twang coming through loud and clear. Visually, the movie borrows more from comic books than video games, with a large number of split screen shots and a lot of KA-POW-ing going on. There are a few references to the pixelation of old video games, with large blocks on the aforementioned hammer for instance, though it is much less prevalent than in the audio effects.

One thing about the movie that I must mention are the rapid transitions: there is very little down time between the scenes and scenes often end before you think they will. Scenes blend into one another quickly, as if Scott Pilgrim were in control of the game and is skipping the dialog in order to get to the next battle. It works well, in my opinion, but I can see it being off-putting.

I read several reviews of the movie, some describing the movie as a criticism of current youth culture, with its focus on getting laid, being in a band, and being more concerned with the fantasy of comic books and video games than the real world. This is a somewhat strange interpretation to me, as when I watched the film I believed that what was shown was the world, rather than internal fantasy. I suppose it could all be an elaborate fantasy with Scott’s mind, but then it would be a fantasy that gives his otherwise menial life, to use Jane McGonigal’s words, an epic meaning, a reason to go on. I would argue that Scott is happier because of it, as it is only through this fantasy that he learns and grows.

I think what makes this movie work is that it plays with the idea of life as a game. That, and it knows exactly what it is going to be when it’s setting out. It’s lighthearted, cute, silly, and just a whole lot of fun. I highly recommend it to anyone remotely familiar with gaming or comic book culture. You won’t be disappointed.