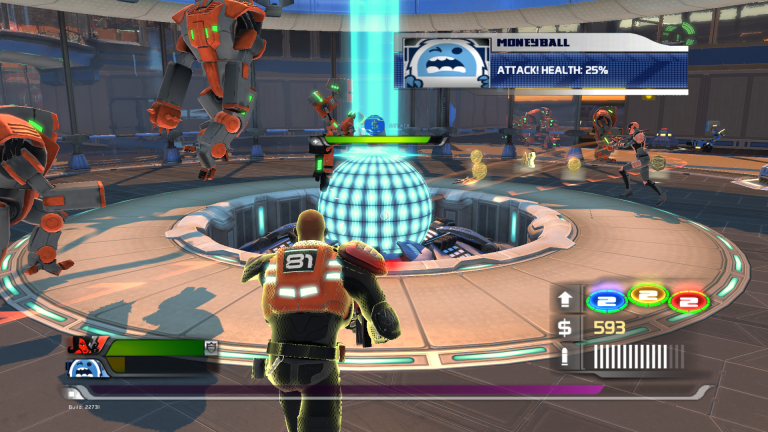 The classes are pretty standard, but each has skills that set it apart from the others.

Thank goodness the Steam Summer Sale has finally ended. I have *ahem* dozens of games to play and write about. Monday Night Combat (MNC) is one of the games that I picked up while it was dirt cheap. And it turned out to be quite fun. Developed by Washington’s Uber Entertainment, MNC is a third-person, class-based team combat game.

Several of the classes have the ability to fly for a few seconds, allowing them easier access to certain parts of the map.

I hear your concerns. I think it is fair to say that the game is inspired by Team Fortress 2, but not that it offers a few other features to give it a very different feel.

Monday Night Combat is cast as a futuristic sport, where players, known as “Pros”, battle it out to earn fame and fortune. Two teams battle it out in the arena, each tasked with destroying the other’s Moneyball, a giant glowing orb filled with gold coins. It is a classic setup of base attack and base defense.

The Hotshots have overwhelmed the Icemen defenders, and now their Moneyball is vulnerable.

Why is it that man must always be put against machine?

But the arena has more than just Pros in it. Guarding the Moneyball are turrets which you can choose to upgrade, as well as a number of empty turret nodes you can choose to build turrets on. Even more troubling are the constant waves of robots that spawn, marching toward the enemy base with an absolute disregard for the Three Laws of Robotics. As the waves of bots spawn and clash, and you must choose when to engage them and when to attack the enemy Pros. It feels a little bit like Defense of the Ancients (DotA) that way.

Players choose from among a pool of six classes, each with its own weapon load out and skill set. There is a stealth specialist, a sniper, a Gatling-gun toting fellow… the usual crew. Some of the classes are better at pushing back the enemy bots, while others are better at killing enemy Pros, and having a good mix is key to success as a team.

Sometimes you can perform a powerful attack known as a grapple, which rewards you with a sweet animation sequence. The Assassin's back grapple is particularly deadly.

What makes MNC shine is that in addition to each class’s weapons, they also have three different skills that they can use at regular intervals. Take my preferred class, the Assassin, for instance. She is able to use Dash, to run quickly for a short period of time, Cloak, to obscure her from view, or Smoke Bomb, which temporarily blinds enemies and gives her a second to do a massive get-away jump. All of these help her compensate for having a low amount of health and a short-ranged attack. I can assassinate enemy Pros and then make a quick getaway, or hound enemy bots right as they spawn to force the enemy team back. The skills are carefully crafted to give each class a bit more to do during the game, rather than just spam their primary weapon, and from what I have seen so far, it works very well to give each class a unique feel.

Choosing which skills to upgrade can mean the different between victory and defeat.

Players earn money for dismantling enemy bots and for sending their Pro adversaries to the respawner (They also earn money just for being in the game, but that is less exciting). With this money players can choose to upgrade their skills or upgrade their base’s turrets, or even buy additional waves of bots. There are also jump-pads scattered throughout the map that will open up new paths to your enemies… if you pay to activate them. I can really see how a team spends its money being strategic at a high level. If this game has a competitive scene, I would love to see the kinds of strategies players devised in terms of timings.

Nothing like using Cloak to make a quick getaway. After being out of combat for a few seconds, your health will regenerate.

One nice feature about the game is that a large number of player statistics are tracked, including your “gross earnings” which can be used to purchase extra custom class slots. Unfortunately, it isn’t very clear from the game precisely *what* those extra class slots do. I unlocked one and choose a name, a position (class), and sponsors, but it wasn’t clear if there were any gameplay changes because of it. I was able to find some information about the various benefits on the official forum, but it would have been nice to have this information available in game.

Graphically speaking, the game is decent but not great. Explosions are a bit bland, there isn’t a lot of *pow* from the weapons. The classes are distinct from one another, but sometimes the bots are hard to see given the low contrast colors used. The level design is also uninspiring, with every level looking like… well, an arena. I do like the addition of jump-pads and special areas that are hard to get to, but overall I found the level design to be lacking.

The explosions in the game are fine, but what I really like is that they obscure what is going on behind them for a brief period.

One thing that I do enjoy about MNC is the silly tone of it: it takes itself about as serious as a flamingo slipping on a banana peel (if that is silly at all, I’m not sure). Whether it is the announcer’s ridiculous comments, or the periodic advertisements for faux-companies, or the busty “Pit Girls” that serve as mechanics and cheerleaders, it is clear that the designers have a sense of humor.

No self-respecting sport would be without scantily clad, busty cheerleaders jumping up and down. Tongue-in-cheek folks.

While the game is a lot of fun, I do have a couple of reservations about recommending that you buy it. First of all, for all its differences and all of its charm, it is in the same vein as Team Fortress 2, which is now entirely free-to-play. If you want to log in twice a week for 30 minutes and blow some enemies up, it won’t cost you a dime with TF2. TF2 also has much, much higher production values, particularly with the animations, visual effects, and level design.

Secondly, I’d be hesitant to recommend the purchase of the game because the community is incredibly small. In a game that requires 6-10 people to get a good game going, there are typically only a couple or three servers that are worth joining during peak hours of play. This makes me believe that there’s a good chance you may not be able to find a game. Granted, there is a single-player component to the game, but it is a “hold as long as you can” affair, which isn’t as exciting as going head-to-head with another team.

All in all, I like Monday Night Combat. It’s great to just sit down and play for 15 minutes. Its skill system makes it different enough from TF2 to give it value, but I am concerned that it won’t survive for too long. I guess we’ll have to see.