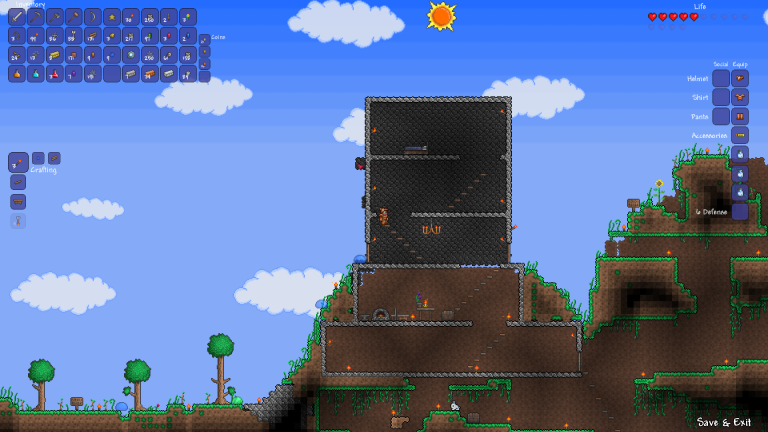 First Impressions | So I sat down to play Terraria…

And I regained consciousness four hours later. I have played many a game in my day, but Terraria has easily been one of the most addictive.

Digging holes is a bit of a chore, but it's also hard to stop once you get going.

Terraria follows in the footsteps of Minecraft: you take control of an avatar and do… whatever. You can dig up minerals to build the best fortress ever, or you can slowly tunnel your way all the way to the Underworld to fight the most powerful monsters, or you can build a quaint little cottage and then go on role-playing adventures with your friends. The game is entirely open-ended and there is virtually no direct guidance on what you are supposed to do.

My first dwelling... sucked. It was a few dirt walls to keep out the zombies, and that was all.

And it is this open-endedness that gives Terraria its strength: because no one is telling you what you are supposed to be doing, you create the narrative of your game. For instance, when I first started playing, I decided to build my house on top of a hill so that it would provide a strategic advantage against the zombies that would come prowling around at night. Then, after my initial position was secured, I replaced the dirt walls with rough cut stone.

I claim this mountain in the name of Too Much Zerging! Here we shall build a fortress to stand the test of time!

The game is incredibly addictive, and given how long it takes to do anything, it can be a huge timesink. The aforementioned fortress has taken a long time to build: somewhere on the order of 8 hours of gathering materials and fighting off monsters…and then I decided that I wanted it in red brick and had to redo much of it.

...but can we build it in red brick instead of stone? Home remodeling is always tricky.

There is a kind of natural evolution going on here: as I dig deeper and uncover different metals, I am able to mine more efficiently and build more items for my house. When I found that first bit of gold ore, I went and immediately tried to see what I could build with it. That kind of exploration is incredibly fun and rewarding.

Earlier today I also was able to get in game with one of my gamer buddies, Majiviper, and he to build a fort to join up with mine. He is taking the naturalist approach, building a den with lots if stone and dirt and allowing the trees and grass to grow up around it. He even made a panic room deep underground just in case the zombies penetrate the front door.

It is such a silly game, but I also find it incredibly easy to fixate on it. While not playing I am looking up guides and strats, videos and amazing works of architecture built by players. Wow. It boggles my mind how long it must take to build something so complex.

I’ve been playing off and on for almost a week, and I have to say, few games ignite the spark of excitement like Terraria. It’s definitely worth a play, to say the very least. Soon you’ll be dreaming of blocks and mines, trust me. I think I’ll come back and give the game a full review when I’ve played it a bit more. Now, if you will excuse me, I have a fortress to build.