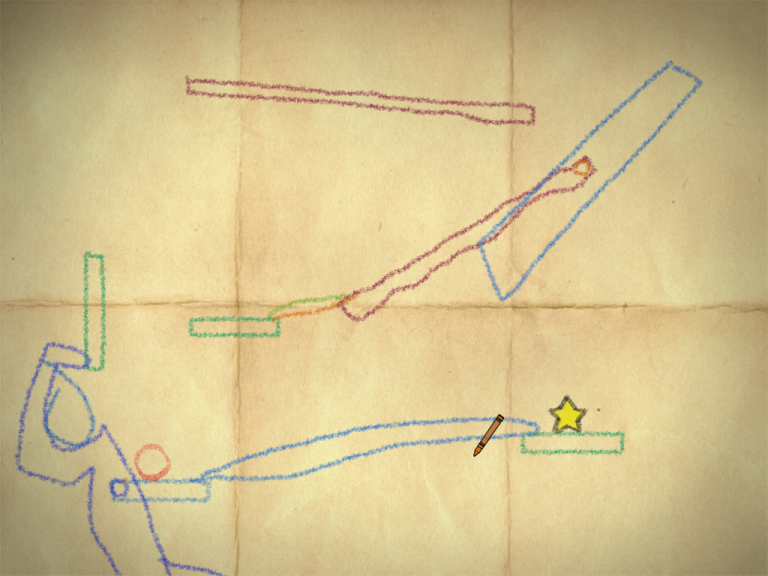 Here I've decided to be incredibly lame in my solution of the puzzle...

I’m psyched for this weekend. My foot is somewhat blistered from playing Frisbee, so I have to stay in and heal. Luckily, this fit in perfectly with my plan of spending the weekend reviewing the games from the Humble Indie Bundle 3. The first game I’m going to tackle is Crayon Physics Deluxe, developed and published by Kloonigames.

...that's a bit better! I don't think that this worked, but it was definitely fun!

At its heart, Crayon Physics Deluxe is a physics puzzle game. The goal is to move a red ball around the level and have it collect gold stars. However, what makes the game unique is the fact that the player has the power to add whatever shapes to the puzzle that they want. Want to add a bridge? Go for it. Need a large lever? You can do that too. Want to make a catapult? Now we’re talking.

Drawing new shapes is a pinch: you simply click, drag, and then release to add it to the world. After being added to the level, the shapes are affected by gravity and may smash into other objects causing unintended side effects.

Once I release the mouse, the black line will pull the red ball up and into the star. Yay physics!

Apart from adding shapes, the only other power that the player has is to gently nudge the red ball one direction or the other. This is in place to allow you to complete a puzzle without having to drop shapes on the ball every time you need to move the ball a little. There isn’t enough force in this nudge to go up ramps or anything like that.

What I love most about the game is the art direction: all of the shapes look just like crayon on paper. It reminds me very much of drawing and writing stories in crayon when I was a kid. The world map is particularly beautiful, with cakes and monsters sketched all over it. One thing that I really like is the fact that paper background that the puzzles are set on has been folded. These folds don’t affect the physics at all, but they do help you measure distances, which can be critical for making new shapes balanced.

The world map is full of fun little drawings to add flavor. Plus you can add your own.

The puzzles of Crayon Physics Deluxe are divided into 8 islands, and as you progress from one island to the next, the puzzles get more difficult and new types of challenges are introduced. So far, I have completed the first 3 islands, which comprises perhaps the first 20 or so levels.

The music is slow and soothing and driven by flute melodies. Again, it transported me back to being a 5-year-old and preparing for nap time. I found the music to be quite nice, particularly when a puzzle was stumping me. I could just sit back, think about how to solve it, and enjoy the music for a few seconds.

Some of the levels have multiple stars, but you don't have to get all of them with the same ball.

There are a few issues that I encountered. As far as I could tell, each level was bounded by the screen. This meant that sometimes I could come up with a solution to the puzzle in my mind, but I couldn’t actually draw it. Most likely this is to prevent the puzzles from becoming too easy, though it would give the game more flexibility in terms of what is possible for any particular puzzle.

Well, this isn't going quite as planned. I can't really draw anything, but I can't nudge the ball over to the star either.

The second issue that I found a bit frustrating was that it was very hard to balance objects. I understand that some of the appeal of the game is the randomness in seeing what will happen when you add a new shape, but a few times it was hard because I would draw a shape and when I released the mouse, the shape would get adjusted a bit to fit in the game world, and it would fall over. Still, not a big deal, as the game is incredibly forgiving. If the red ball ever falls off the screen, another one appears and you just continue onward.

Overall, I like Crayon Physics Deluxe pretty well. I don’t think I’m going to dump 40 hours into it, but I could see myself playing it for a few minutes here and there. The art direction alone makes it a unique puzzle game, and I love that the player’s imagination being their greatest tool. Games that leverage this concept have been some of my favorites, and the game’s charm make up for my few frustrations with it. I can really see a child sitting down and drawing out the puzzles and imagining what is happening on the screen. It is a real treat to play.