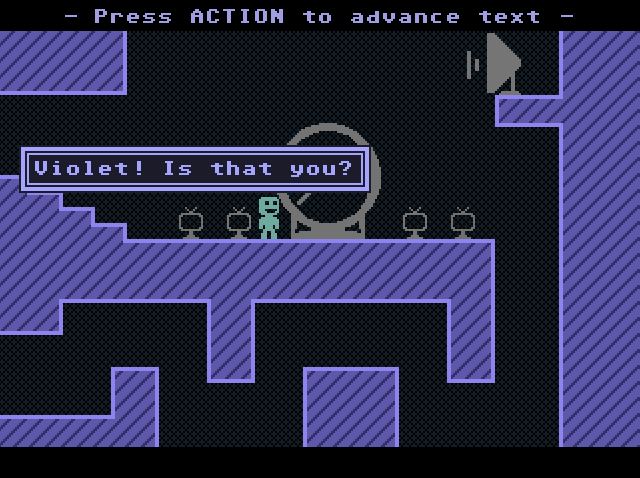 VVVVVV | Try as I might, I couldn’t get into this one.

I found several personal log files scattered throughout the ship. The length of the entries seems to suggest that the crew was using Twitter as a means of recording their journey.

Well, if you haven’t purchased your Humble Indie Bundle 3 yet then you are out of luck… for now at least, as the Bundle is no longer available. Do not despair! You can still get the games on their own, or even wait until Humble Bundle 4, and see if Humble Bundle 3 games will be included with it. Today I’m taking a look at VVVVVV. It’s a retro indie platformer developed and published by Terry Cavanagh and the last of the original five games of Humble Indie Bundle 3.

These moving platforms make a nice challenge both right-side-up and upside-down.

In VVVVVV, you play the captain of a ship whose sole mission was to explore other dimensions. Yes, I said “was.” Unfortunately, on the most recent voyage, something went terribly wrong. Your crew members have been scattered all throughout the ship due to a dimensional warp anomaly (or something along those lines), and it is up to you to get the gang back together safely.

I didn't get too deep into the plot and only rescued the first crew member, Violet.

The game is retro in just about every sense that a video game can be retro: the gameplay, graphics, and audio are all lifted from the days of yore when the fastest machine on the block was a Commodore 64. The only thing missing here is distribution via floppy disk in a plastic bag.

You have three different controls: move left, move right, and flip the gravity of your character. That’s it. No jumping. No crouching. No laser guns. The game world is a grid of screens, each its own “jumping” challenge that must be passed before advancing on to the next. These challenges involve flipping gravity at the correct moment and doing so in a way that you avoid the various spikes and enemies that litter the world. While some of the challenges that I completed felt satisfying, more often than not I was frustrated by the difficulty of the “jumps,” even when there are numerous save points through the maps. That being said, the flipping of gravity mechanic is a very unique approach to the tried-and-true platform genre.

The Tower level absolutely destroyed me and caused me to stop playing. I got stuck in a spot and died every six seconds for about 15 minutes straight. Not fun. 🙁

The graphics are blocky and limited to just a few colors. There is little animation to speak of, though I have to say that the protagonist’s frowny face makes me laugh every time I see it (which is a lot due to my ineptitude for platform jumping games). One thing that I am on the fence about graphics-wise is how the color of the environment changed: each screen has its own color, making it hard to figure out just where I was in the world. I think I might have been more apt to navigate without going to my map if the world’s regions were divided into the different colors. Here is the red section of the world, here is the blue section of the world. This isn’t a big issue, but I thought that it was a strange design decision.

The music is synthesized, fast-paced and recorded in short loops. Given my aforementioned ineptitude with platform jumping games, the music gave me a bit of a headache after the first ten minutes or so, with the same tune playing over and over again. So in that regard it is definitely like its Atari roots and, to be fair, the music does hit the nail on the head in terms of hearkening back to the Good Old Days (TM).

This game destroyed my gaming ego. It’s very difficult. More than that, it was difficult in a way that didn’t give me a sense of accomplishment when I did advance in the game. Try as I might, I couldn’t get into it. Each of the four times that I sat down to play ended after fewer than twenty minutes. I don’t know what exactly it was, whether the graphics didn’t lure me in, the story was too bland, or the constant dying, but I was never enthralled with the game. I can see where some would love its throwback feeling, but I would recommend it only to someone with infinite patience, infinite skill, or a penchant for masochism.