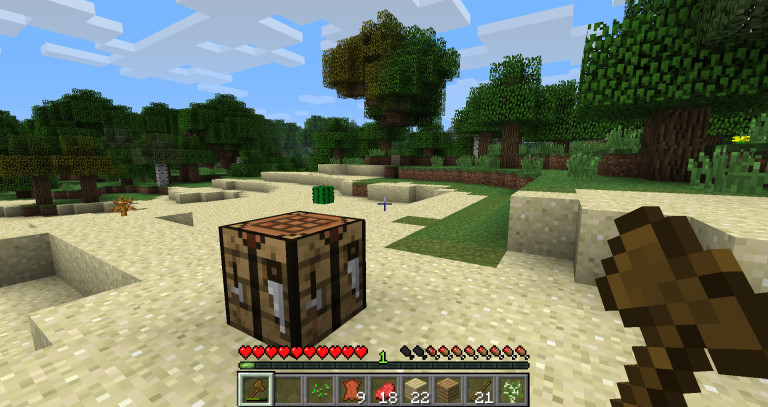 Why did I build the Parthenon in Minecraft?

Not even sheep could stop my need to construct some monumental architecture.

Sometimes I do ridiculous things.

I started playing Minecraft about three weeks ago. I had heard a little about the game, but hadn’t found the want to play it. After my experience with Terraria, I decided to give it a try.

My first attempts at doing anything were horrendous. I wanted to build a log cabin on the hill, but I was overrun with creepers and skeletons on the first night. I spent a lot of time punching dirt, but it just wasn’t doing it for me.

The Parthenon is the light to guide your way in the darkness.

Then I started playing with my brother and his close friend. We built up a small off-shore base, named Sea Bass. There we were safe(ish). With a minor base of operations established, we slowly built up resources and discovered new recipes.

Then, for whatever reason, I decided to build the Parthenon on a hill opposite of Sea Bass. I figured that the hill would serve as a nice Acropolis.

It was a moment of insanity that influenced the next 8 hours of gameplay. I shoveled virtual sand, compressed it into virtual sandstone, and slowly built up my monument. I even tore off the roof and rebuilt it when it didn’t meet my (low) standard for historical accuracy. After the last block of sandstone had been put into place, I set about giving the building some impressive lighting. Then I cleared the land near the Parthenon to make room for my olive grove.

The Red Keep in Terraria took quite a bit of work. Mostly because I tore down the stone version that was its predecessor.

Now, why on Earth would I do this? The building serves no in-game purpose. No one in our group uses it for anything. Sure, it looks amazing in the horizon and is wonderful at night. But it doesn’t do anything.

It’s strange that I had exactly the same feeling in Terraria: I thought, “Hey, this castle would look so much better if it were made out of red bricks! It’ll be like the Red Keep in Game of Thrones!” And then I proceeded to tear down the castle I had built and collect clay for rebuilding for… let’s just say a while.

My brother has decided to construct a series of massive towers and connect them with bridges. He is our pontifex maximus.

The power of my imagination ensnares me. Most games don’t really harness this. Usually there is some call to action guides the characters through some kind of adventure. Here, it is the imagination that drives the player. And apparently I have an industrious imagination.

The foundation for my new castle has been laid...

There is something about the ability to create that is incredibly appealing.

I mentioned that my brother and his friend are also playing in the same Minecraft world; both of them are now involved in their own monumental architecture projects. It seems as though I’ve started an architectural arms race to see who can build the most badass structure. So far, my brother’s friend has built an entire apartment complex combined with a deep mine, while my brother has built two towers that touch the top of the world. Now I’m going to up the ante by building a castle with an entire forest on the top of it.

Round and round we go. When will the blocks stop, nobody knows.

I love it! I myself havent played minecraft mainly cause i like terraria so much.

II’m not sure which game I like better. I feel like Minecraft has a better construction system, while Terraria has a much more enjoyable combat system.