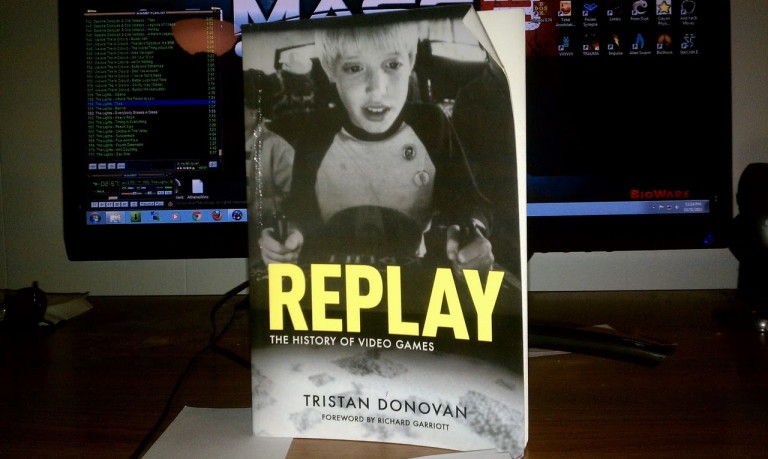 It’s been a while since I’ve reviewed a game-related book. Well, the time for a new book review is now!

The book of the day is Tristan Donovan’s Replay: The History of Video Games, published by Yellow Ant in 2010. The work attempts to cover the history of video games from their inception 1940s to the gaming explosion in the 2000s. And for the most part, Donovan succeeds.

The author has his work cut out for him: he chose to cover a period of 70 years of vibrant history. Donovan’s research is thorough and he uses a wide range of sources, from published papers to personal letters of developers, to one-on-one interviews. The effort was worth the work, though, as Donovan tells the story of video games from a multitude of facets that are all skillfully intertwined: the reader learns about how individuals, technology, companies and even politics influenced the evolution of video games, from Spacewar! to The Sims (and beyond).

Individual developers are often the stars of this book. A good example this is the “ah-ha!” moment of John Carmack, when he pitched to his co-workers at id Software the idea of releasing the tools used to create additional content for their upcoming title, Wolfenstien 3D, thereby making the players a major source of content. This improved the longevity of the game substantially. This became a selling point of many games that followed, notably Valve’s Half-life and Blizzard Entertainment’s Starcraft.

A good example of technological change influencing game development is the Donovan’s discussion of the introduction of the CD-ROM. Prior to this development, games were distributed on floppy disks, which held around 1.44 MB, but CDs can hold around 600MB. With all of that space, game developers went crazy adding high-resolution images, high-quality audio tracks, and realized that they could for the first time include full-motion video in games, which lead to games telling stories in video clips, for better or for worse.

The book is organized roughly in chronological order, with each chapter telling a small piece of the history of video games. Most chapters function on their own as well, each telling a separate part of the history of video games. Chapters cover topics ranging from the birth of Atari, the marketing wars between Sega and Nintendo, Mortal Kombat and game regulation laws, the rise in beat/music game popularity with Dance Dance Revolution, all the way up to the birth the MMORPG genre. That’s a lot of ground to cover in around 300 pages.

Unfortunately, the flow of the book isn’t very consistent. Like All Your Base, I found the first half of the book to be much stronger than the second. The first chapters focus on the few more well known heroes of game development, such Nolan Bushnell and Ralph Baer, and follow their stories closely. However, after about the Nintendo Entertainment System era, the story of video games in the book becomes much more muddled as each chapter takes on its own agenda. The work still follows common figures, but it becomes less clear how they are related to one another. This was most likely due to the explosion of gaming that occurred in the 1990s.

Additionally, I question some author’s choices on what to include: some chapters are only included in the book to fill some niche that the author could not ignore, but also did not research as thoroughly as the earlier chapters. A reader could pick one that seemed interesting and get something of value, but may walk away with some questions or some confusion as to why the chapter was included and how it relates to the book as a whole. The “big picture” narrative is a bit out of focus.

I think the book is well-written and the chapters themselves are, for the most part, well structured. I do wish that there were more illustrations. Not because, you know, I can’t read, but because modern video games are highly visual and a significant part of video game history is how graphics, player perspectives, and user interfaces evolved over time. I also would have liked to see more portraits of the developers and other characters in the narrative; with so many people being mentioned, and often only significant for a few pages, it would help to have a photograph to help keep the key players distinct in the reader’s mind.

The author also included a “gameography”, which is a reference list of hundreds of games. The amount of information for each game is minimal, typically title, year published, developer, publisher, and perhaps one sentence describing the game, or how it is related to other games or how it impacted the genre. While this is potentially useful, I don’t see it adding a whole lot of value to the book, particularly when more (and deeper) information about any of the games can quickly be retrieved from anywhere on the Internet, though I will concede that knowing what to search for has significant value.

Overall, I enjoyed the book and would recommend it to anyone who is interested in the history of video games. Is it perfect? No, but it is generally thorough, well-researched, well-written, and is a great starting point. It has a much more formal tone than All Your Base, but that doesn’t keep it from being a fun and informative read.