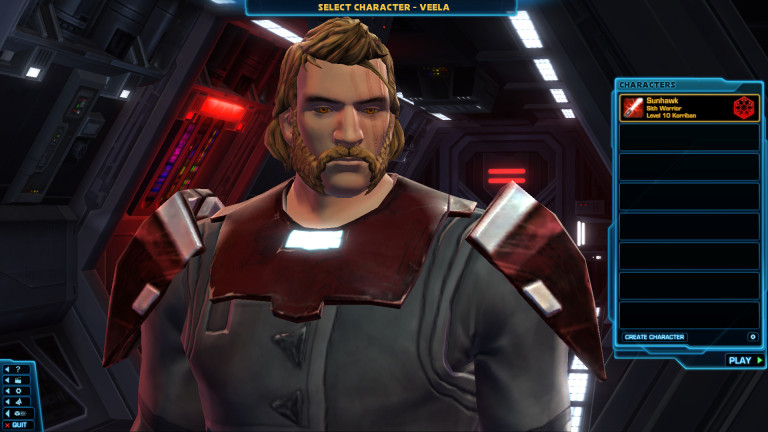 A couple of weeks ago I received an invite from a friend for Star Wars: The Old Republic, a MMORPG developed by Bioware and released last year. I decided to give the galaxy far, far away a try, but my experience ended up being lukewarm.

Let us pray together to the God of Geometry.

It started out the way that most MMORPGs start: with character creation. Because I always prefer to get stuck in a fight, I chose to make a Sith Warrior, a powerful front-line combatant. The game offered the usual customization of my character’s appearance, including what species he is, how scrawny or brawny he is, and what hair stylist he goes to. To make him look imposing (as any evil-doer must) I gave him Civil War-era mustache, sideburns, scars that made him look like he got in a nasty fight with a puma and lost, and the largest and most muscular frame the game would allow so that I could walk around and speak like Ah-nold.

Picking up the practice sword

Once in game, I met up with my two friends and we began to cut a swath into our enemies, who were mostly indigenous, underfed animals and patrols of enemy soldiers that had nothing better to do that stand around in convenient groups of two to three. Even though I was armed with a mere training sword, my allies and I ended these fights in just a couple of seconds.

Nothing like a leap to get you into someone's face as fast as possible. If they have a face, I mean.

The Sith Warrior, from what I gather, is somewhat akin to the Warrior class in World of Warcraft. As I use my basic attack, I generate rage that I can then use on more specialized attacks and abilities. Early on in my adventure I learned a powerful jumping attack that allows me to get up close and personal quickly. Typically, I would jump into the fray with one of my teammates and we would both unleash our area-of-effect attacks, instantly decimating most foes. Anyone that survived the assault would be pounded by my second ally’s blaster fire. Obviously these were the training missions, but it felt good to defeat enemies with such dramatic punctuation.

It's a dragon... I mean slug-monster-thingy. Attack!

The more powerful enemies could weather our attacks for a few moments. These gave me a chance to try out other skills, such as a slow but crushing two-handed swing. One thing that tripped me up with the combat system is that I needed to constantly hit my “1” key in order to keep building rage. I’m sure it is something that I could get used to, but for the time I played it lead more to brainless button mashing than fun, mechanical play.

Like other MMO games, The Old Republic relies on questing to both tell the story and advance the players’ characters. The quests were about what I expected from an MMO: go talk to this person, go pick up these items, go kill ten grumpkins… that kind of thing.

Your decisions during quests affect the fate of NPCs. Don't annoy people that can zap you.

One thing that I am torn about is the class-specific quests. On the one hand, they tended to be more compelling than the run-of-the-mill quests, but on the other it was a pain to have to complete them twice (we had two Sith Warriors in the group).

Let’s have a chat

While the tasks themselves felt somewhat tedious, the cinematic conversations are what absolutely set The Old Republic apart from any other MMOs that I have played. Virtually every quest has some dialog attached to its start and its conclusion all of which helped to draw me into the story.

What’s more is that the scenes are handled well when you are in a party as well as when soloing. Cinematic scenes in multiplayer games aren’t usually implemented well. All too often it degrades down to a conversation in Ventrilo, “Are you through with the cinematic yet? Come on, skip it, let’s go!”

"Coming to you live from across the zone!"

Because I was in a party, my character and my friends’ characters were able to join conversations with NPCs as a single unit, even if one or more of the characters are off somewhere else (in which case they can participate as holograms). During the conversation, we would get options for how to respond and these choices earn each character points with either the Dark or Light sides of the Force. I’m not sure exactly what these points do, but I decided to be a good little Sith Warrior and earn some Dark Side points.

"I feel the Warp overtaking me!" Oops, sorry, wrong IP.

These choices directly affect not only NPC dialog but player characters’ spoken dialog as well. Here The Old Republic does something that I found very clever: each player chooses their response, but then the game has each character “roll off” to see which character “takes the lead” in the conversation. Players are rewarded with Dark or Light points based upon what they selected, not on who won the roll. It flows well and it’s fun to see the whole team contributing to a conversation, especially when the group is torn between Light and Dark, causing the conversation to ebb and flow in peculiar ways.

The multitude my friends’ friends

One thing that ruined the illusion of the game for me was the use of companions. We each received a rather talkative alien companion to take with us on one of our early missions, but we were able to “summon” her out of thin air by pushing a button. Because we needed her to unlock… something, it meant that each member of the party had to summon her and wait for her to do her unlocking animation. It was a bit of a drag, to be honest, as it just felt wrong. Up to this point, nothing had jarred me and pulled me out of the world.

Am I a horrible human being for electrocuting a digital representation of a person?

I decided to be a horrible person and torture my companion. She wore a collar around her neck that I may or may not have electrified a few times when she was being mouthy. I lost reputation with the companion, but did gain some Dark side points for the trouble.

A crypt in the desert

Wandering through the desert of Korriban with my buddies. Good times.

The early missions on Korriban focused on wandering through the desert and exploring ancient Sith tombs. I found the desert canyon landscape to be rather uninspired with the exception of the various statues and other artifacts. The tombs themselves were more detailed and potentially interesting to explore, but the drab color schemes didn’t invite me into them. Also, I felt like there was little exploring to be done; everything was so close that I never had to run for more than a minute or so to get into the belly of the tomb, and that was with clearing out the enemies.

Who has the time to make all of these statues? Sheesh!

While on the subject of art design, I do have to say that the animations are quite superb. Attacks are varied and show blades bouncing off one another and I can only imagine how good this looks when you have a real lightsabre. Each of my abilities seemed to have its own animations and effects making hitting each button rewarding.

Force Point, one of the lesser Force powers in the game.

Overall, I liked The Old Republic, I really did. But I just found it far too similar to World of Warcraft in terms of gameplay, from the classes’ mechanics to abilities themselves to the hovercars that ferry you around the zone; I understand that WoW is a great formula for an MMO, but I just feel like The Old Republic stays a little too close to the proven formula for me to justify dropping the money to buy the full game. Almost everything in the game I had a moment where I thought to myself, “Well, this is like how it is in WoW. What are they doing differently?”

I understand that none of these mechanics are unique to (or originally in) World of Warcraft, but I found the similarities distracting. I suppose I was hoping more for something along the lines of Jedi Knight: Jedi Academy, but that isn’t what I played.

Perhaps I’ll give it another try on some free-to-play weekend, but for now I’ll have to give it a pass.

I can see Star Wars fans geeking out over it and enjoying themselves, or players that have exhausted the content of their current MMO, or someone who wants to explore the intricacies of the story.