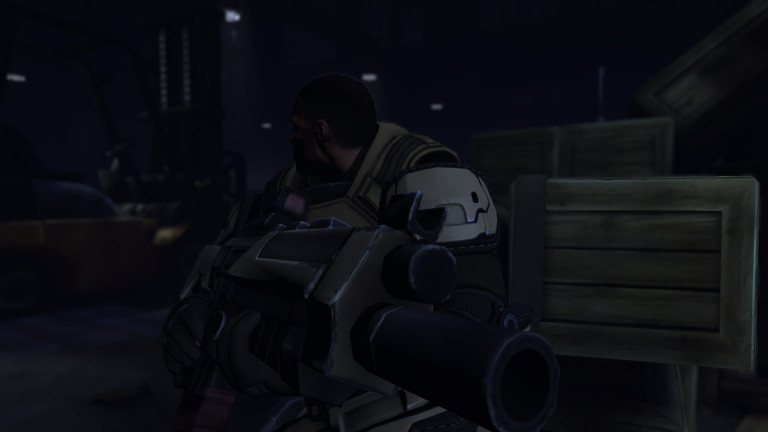 Some games defy the paradigm that the end levels should be the most difficult. Deus Ex is a good example; with the opening levels being fairly difficult compared with the game’s final act, mostly due to the awesome augmentations the player develops over the course of the game.

I feel like XCOM: Enemy Unknown has a similar problem. The hardest part of the game (for me) is the early game, where funds are low, soldiers are green as summer grass, and the aliens are as relentless as they are blessed by the God of Random Number Generation (RNG). A skillfully commanded squad of Colonels can slice through even the toughest alien groups. While kicking the aliens off of the planet with heavy plasma weapons in the late game is fun, it doesn’t have the same level of tension as the early game.

[Sidenote: The spelling and pronunciation differences for “Colonel” blows my mind every time I think about it.]

“SURPRISE! I brought you a cake!”

Because of this, I’ve been thinking about ways to make the mid-to-late game more exciting and unpredictable. I considered just using rookies or other low-experience troops, but that felt somewhat contrived and frankly, a bit boring. It would definitely make the game more challenging without being able to abuse skills such as Lightning Reflexes, but it also wouldn’t make a whole lot of sense from a tactical perspective.

The biggest problem with this is that a big part of a campaign is making up back stories for each of my soldiers and getting to know them, and starting over every couple of missions kind of defeats this, since I would not have any time to develop a connection with my soldiers. So, I decided for something a little different: I decided to activate quirks mode.

I decided that the challenge of the game was only part of the problem. I also want all of my soldiers to have a distinct personality that affects how I play them. I thought it might be fun to draw up a few “Quirks Trees” that soldiers must put points into. Each quirk would affect their behavior in some way, restricting some action or giving the character, well, quirks. For instance, here are handful of my favorites (complete with semi-clever quirk names):

Killstealer
May only target enemies that have been wounded by allies.
Clingy
Must remain standing next to an ally at all times.
Shark
Must move every turn. May not end a turn with overwatch or hunker down.
Horror Movie Fan
Soldier has a tendency to have casual sex, do drugs, and investigate alien sounds by themselves and without telling anyone where they are going.
You’re With Me, Rookie
May not deploy this soldier without a rookie in the squad. Assume the rookie has Clingy on this character.
Junkfood Junkie
If this soldier sees any junk food or places where junk food may exist, they must go investigate for at least 2 turns. Aliens who found destroying junk food will face the soldier’s wrath!
Favored Enemy: XXX
When an enemy of the chosen type is present, the soldier must attack that enemy. You may not retreat, help allies, or target another alien.
Acceptable Losses
No weapons allowed besides grenades and rockets. Soldier must damage an ally with every rocket or grenade.

For added difficulty, soldiers would be forced to acquire new quirks every few levels… but that might get too complicated and too hard to keep track of.

I’m trying to categorize the quirks in ways that make sense (quirks related to relationships, equipment, aliens, engagement rules, etc). Once I get them into some kind of order, I think I’m going to do a Let’s Play series with them. I think this has a lot of potential, because while the gameplay itself is fun to watch, what draws me in to other Let’s Play series are the author’s stories about their characters. With a set of well-defined quirks, it will be easier to create a compelling (or at least entertaining) narrative.

I will also have to keep in mind that soldiers may gain new quirks based on what happens to them in the field. For instance, if a soldier takes a plasma shot from a sectoid and is gravely wounded, they might be terrified of sectoids from that point on (or be eager for vengeance!).

Anyway, I’m excited to get this all organized and try my hand at another Let’s Play series.