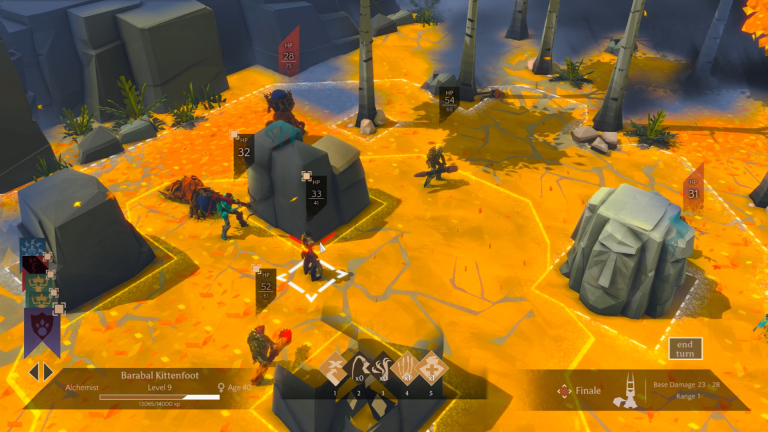 I’m going to jump right into it and try to get caught up here. I’ve done a rather poor job of keeping my blog on par with my YouTube channel recently, and for that I apologize.

There is something about a great game that just sticks with you. It’s hard to describe, but some games just have that essence, when you play them, you can feel it. They rub off on you in ways that you can’t quite pin down.

I’m not exactly the biggest fan of RPGs, but I play them on occasion. However, I am a big fan of the Mass Effect and Dragon Age series. I think both are quite good (well, Dragon Age 2 is merely okay). In any case, instead of describing the gameplay for this episode, I go off on a long tangent about those games and my plans to play them.

Finally, I get back on track with a good ol’ fashioned Massive Chalice battle! This one features a rather clever move on my part: a nasty ambush of the Cadence on a stone bridge.

The Cadence was lured into the trap by careful movements and then finished off with a combination of explosives and cabers. To victory!

Oh Double Fine, what have you done? Somewhere along the line, you went and broke the Skipping Stone, my favorite item in the game.

The Skipping Stone is the best item in the game, or at least the most fun, because of its incredible utility. Like the Vengeful Spirit’s Netherswap ability from Dota 2 the Skipping Stone swaps the locations of the user and the target. You can do all kinds of fun tricks with this ability, such as swapping a Hunter who has been accidentally discovered with a powerful Caberjack. Or maybe you swap in a Twitcher (two can play!) into your whole team and then gang up on the beast.

The Skipping Stone is also greatly valuable when used on someone who has already consumed their moves. It allows you to get multiple hits from the same location, such as a Caberjack who is trying to knock one enemy into another.

Unfortunately, Double Fine broke it at some point. Occasionally, Skipping Stones will put the user “inside” their target. Other times it will knock back the target, which in itself can be nice, but is often not the intended action.

I hate Lapses. I mean, I don’t hate them, but I hate them. They are one of the most annoying enemies to face in the game, especially when all of your characters are max level. Nothing is more annoying than having a level 10 character get hit once and lose their most powerful ability.

Of course, there is a fix for this, and that is to equip your characters with Wunderpants, but I find that the trade-off just isn’t worth it, especially since you can only send 5 heroes on each mission. You’d have to constantly be using “Prime Target” on a Caberjack for it to work at all.

Perhaps it’s worth a shot. Maybe next time.

One thing that I feel like Massive Chalice needs is a way to hunt down the last few enemies.

Now, I know that they’re supposed to be hunting you down, but in my experience this isn’t the case, or if it is, the Cadence is not nearly aggressive enough.

In any case, I think that the game should take a page from XCOM‘s book and add a “Shh… I hear something over this way” effect. It would make the last few enemies much less aggravating.