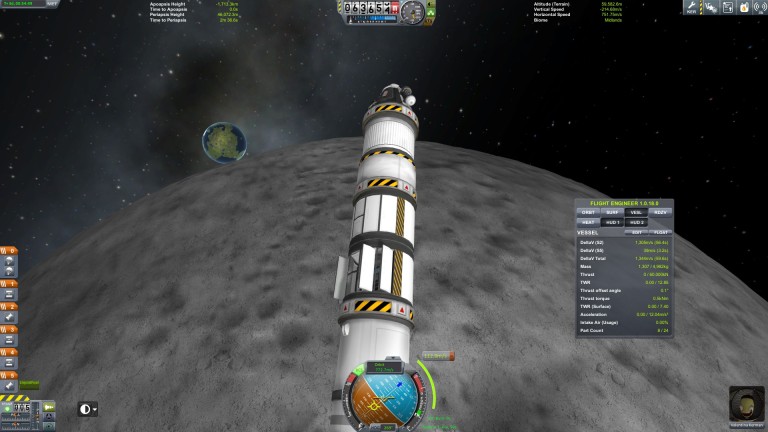 Kerbal Space Program: To the Mun

The last week or so I’ve been spending some time playing an amazing little game: Kerbal Space Program.

I’d heard about it a year or so ago, but never looked into what it was all about. I knew vaguely that it had to do with building rockets and trying to see how far you could get them.

And that’s precisely what it is.

But it is also so much more than that. It’s hard to explain, but the game has pulled me in in a way that few games do. 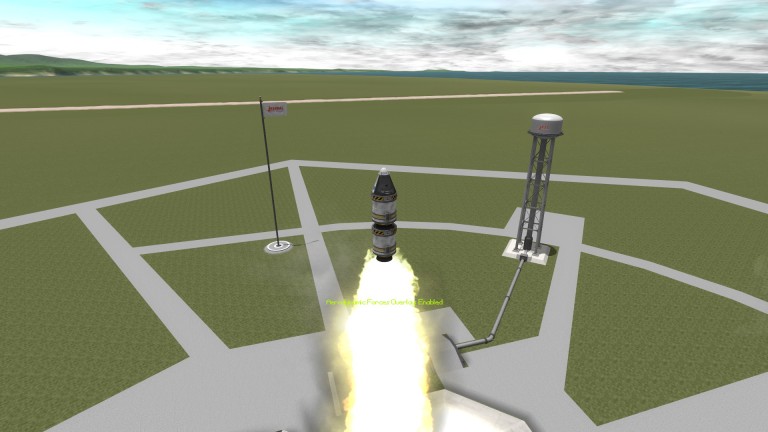 The Scorpion rocket. A simple thing, but everyone starts somewhere.

It began so simply. I needed to build a simple rocket and put a Kerbal into it. Kerbals are cute little green creatures from the planet of Kerbin, a planet that somewhat resembles our own planet Earth.

I stuck a command module on top of a rocket with a bit of fuel on it. Feeling a deep kindness in my heart, I even attached a little parachute to the craft so there’s a chance that my little Kerbal might survive my first flight.

It took a few tries, mostly I got hung up on the use of the shift and control keys to control the throttle, but after a bit, my first rocket was zipping a few hundred meters into the air, my Kerbal’s mouth gaping open in amazement.

I pulled the parachute as the craft reached its peak and started back on its way down. It hit the ground a minute later with a little clunk, but my Kerbal was safe. We were now a space-faring civilization.

Around the World in 80 Minutes 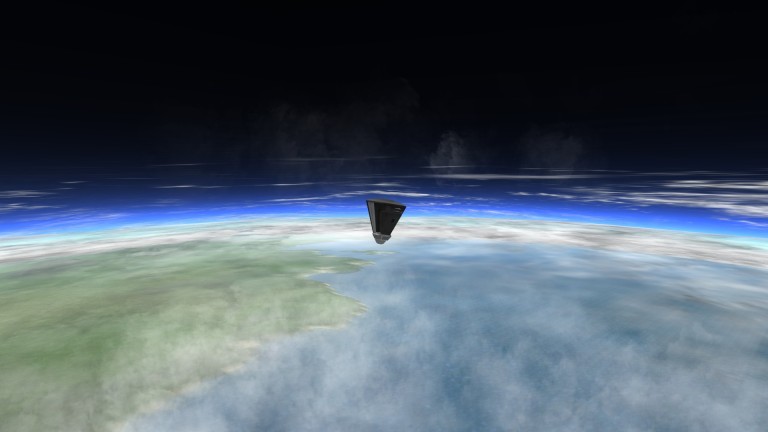 With my first flight successful, I decided to try again. I added additional fuel to the craft, hoping that it would get me higher. And lo and behold, it did!

You see, craft that go up into the air tend to fall back down. However, they also tend to fall faster. This excess speed wasn’t disapated quickly enough, and my landing pods started to disintegrate in the air before landing, or even worse, be traveling so fast that the parachute couldn’t be safely deployed, causing the poor Kerbal’s craft to smash into the ground going several hundred meters per second, turning the craft into a tangle wreck and the passenger into green jam.

It took some doing, but thanks to one of my followers on my Twitch stream, I was able to finally get a craft high enough and angled correctly so that they could do a sub-orbital trajectory and not explode on the way back. In general, I was launching my Kerbals too steeply, making it so that their angle was too steep on the return (being the same as the one up, given a parabolic trajectory), not giving enough time for wind resistance to slow down the craft. I flattened it out, and found myself able to do sub-orbital flights.

Breaking these records added to my science, which is a currency used to purchase new technological upgrades. Soon after, I unlocked larger engines, more parts, solid fuel boosters, and devices for doing even more science.

The Doomcake (I decided to name my crafts after various followers in Twitch chat) became my first series of rockets to reach an orbit. Now granted, I didn’t provide them with enough fuel to get down from their orbit, but that is neither here nor there.

One small step for a Kerbal… 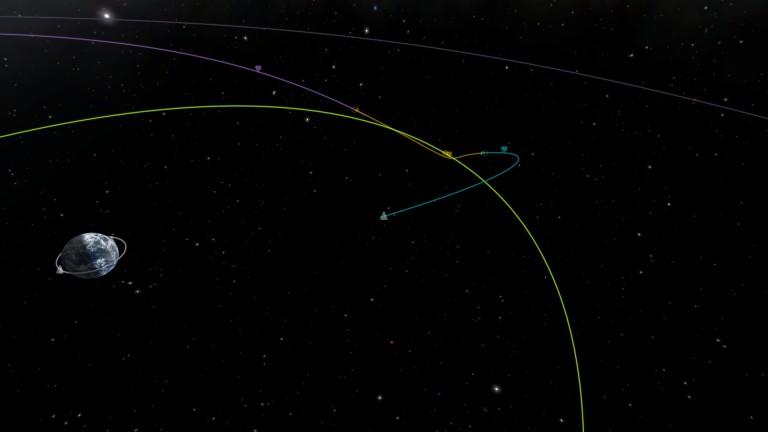 On course for a Mun encounter!

Several days after I started playing, I finally found myself in a position where I felt I could make it to the Mun. I sent Valentina Kerman, one of my most experienced pilots on a trial run using the Confusador series of rockets.

The first rocket reached the atmosphere and I established a nice orbit around Kerbin. Then I had to plot the path to the Mun.

Plotting the trip to the Mun took a bit of work. You have to account for the low amount of gravity emanating from the body, and the amount of time it takes to go the distance. The game’s maneuver planner helps a lot with this, but it’s also fairly easy to screw it up. Luckily, once you’re in space, you can make changes fairly easy thanks to Sir Isaac Newton.

I initiated a prograde burn on the far side of Kerbin, increasing the size of the orbit until my path intercepted with the Mun. The first burn went off slightly, so halfway there I made a quick adjustment to get in closer.

There was only one problem with the mission: the Confusador was out of electric charge because someone forgot to put batteries or solar panels in the design. We couldn’t steer at all without firing the engines and were already low on fuel from a rather inefficient burn to the Mun. We had to scrap the landing attempt, but we were able to do a fly-by and get some valuable science while orbiting the Mun. This knowledge would help push us further into space. 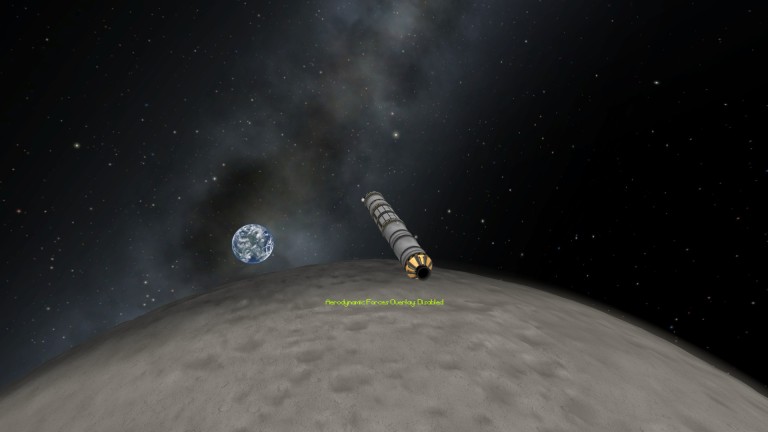 The first Confusador rocket to reach Munar orbit could not land due to electrical failures.

We set a maneuver to burn out of the Mun’s orbit after several revolutions, and headed back to Kerbin.

… one Giant Leap for Kerbalkind

The next mission we packed additional batteries and solar panels. We knew what we needed to do. We had experience with the maneuvers.

Valentina was not satisfied with only a fly-by. She was determined to be the first Kerbal on the Mun.

The second Confusador Mun mission made an approach much like the first, but the added ability of the electrical systems working made the run smoother. 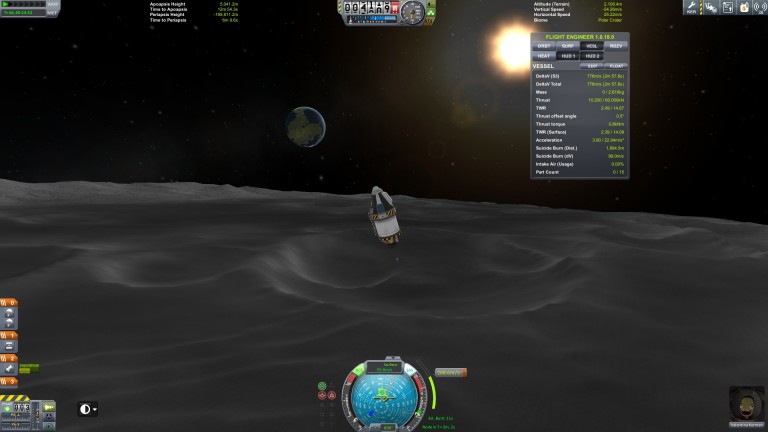 We decelerated into Munar orbit and detached our engine that had expended its fuel getting us this close. With each orbit, we burned retrograde a bit more, decreasing the distance at which we orbited.

The engine was a bit fickle and wasn’t sure whether it actually wanted to land on the Mun. We didn’t have any landing technology researched yet, so we had to land on our butt and hope for the best.

After hovering and hopping upward several times, the little capsule ship landed on the Munar surface… and immediately tipped over.

Luckily, the courageous Valentina Kerman was unharmed and the ship sustained minimal scuffing to the paint job. 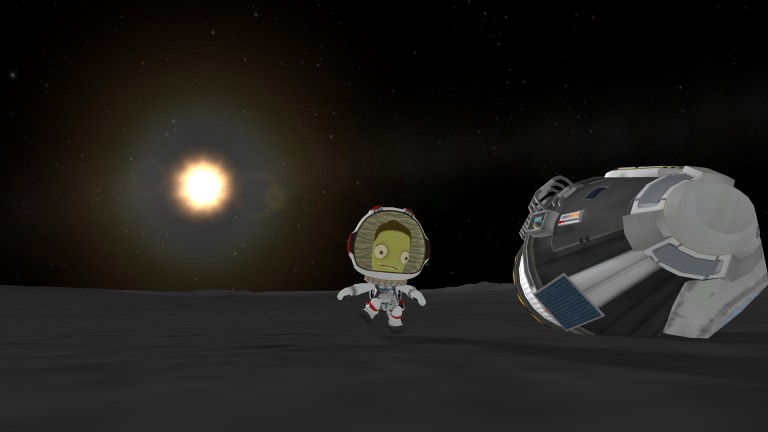 Valentina performs an EVA on the surface of the Mun!

Valentina popped open the hatch and jumped, landing on the Mun with a crash. She became the first Kerbal to walk on another planetary body.

She planted a plaque on the surface, commemorating the date of the Space Age that we had conquered the Mun.

The celebrations were heard all around Kerbin. We had done it.

With all we had accomplished, we looked ever onward. Toward the infinity of space. Further and faster, ever onward, ever upward.

Next time: can Kerbin unite, set aside their differences, to bring their heroine home? 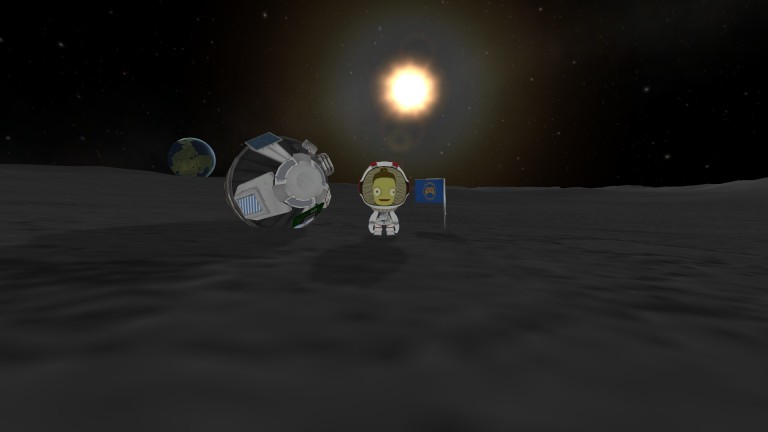